Mist on the Agawa 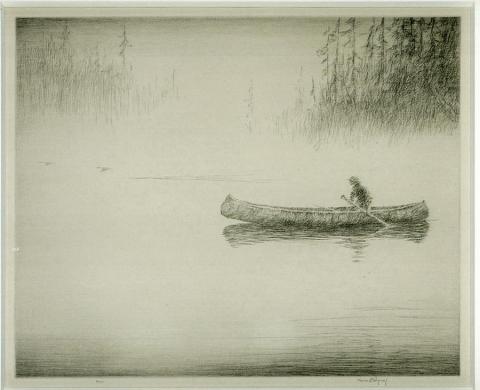 This is an original etching by American artist Harold Kerr Eby.  The title is: Mist on the Agawa.  It was created and printed in 1928 in an edition of 90.  This image is hand signed in pencil with the "imp" after the artists name, it indicates that Eby printed this impression himself.  The image measures 10 1/16X11 7/8 inches.  The subject, the Agawa River was north of Lake Superior in Ontario.  This etching is nicely framed with archival materials.  This image appears in the Eby catalog as image number G-134.

Lopokova and Nijinski in Les Sylphides 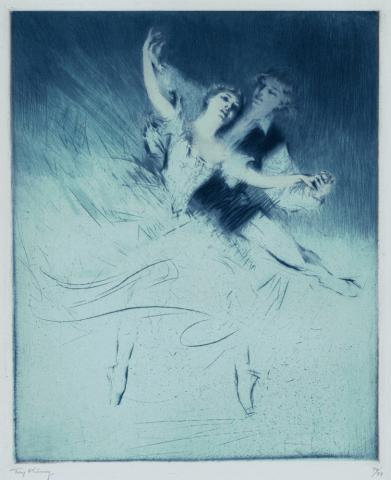 This is one of the most important works by American artist Troy Kinney (1871-1938)  This artist was best known for his studies of Ballet and Modern Dance.  The title of this work is: Lopokova and Nijinski in Les Sylphides.  It was created and printed in 1916, This hand colored etchings is numbered as 76/82.  The image measures 12 1/8X9 7/8 inches.  The etching is hand signed in pencil lower left border.  Very fine condition, the colors are richer than our image suggests.  The image appears in the 1020 Kinney catalog as image number 11. 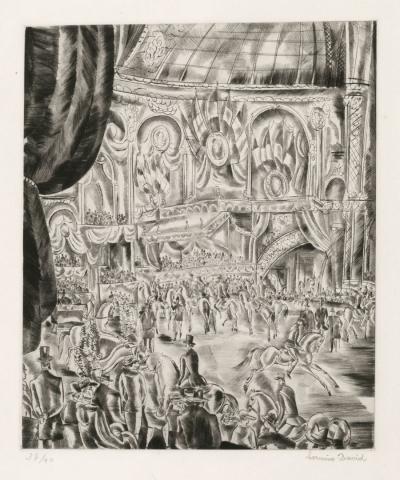 This is a beautifully energetic original etching with drypoint by French artist Hermine David. The image size is 9 7/8 x 8 1/8 inches, published in 1927 in a small edition of 40, pencil signed and numbered. A rich impression on a medium weight watermarked wove type paper. Hermine David was born and raised in Paris and at the age of 16 was accepted into the Ecole Des Beaux Arts, later going on the study at the Academy Julien. She was a well known painter and printmaker and was very active in the thriving artist community in Paris in the early 20th century. She was married to fellow artist Jules Pascin for several years, but in 1920 the couple divorced and David set up her own studio in Montparnasse. She went on to have a long successful career as an artist and illustrator and was awarded the Legion of Honor in 1932. 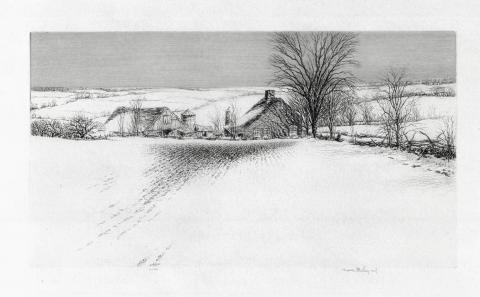 This is an original etching, pencil signed by American artist Kerr Eby.  The title is: Winter Wheat,  it was created and printed in 1933 and appears to be a view of his Westport Connecticut  home.  The image measures 6 3/8X11 5/8 inches.  Printed on a medium weight wove type paper.  It has the "imp' after his name, meaning that he printed this impression on his own press.  The edition was 100 and appears in the Eby catalog as image number 176.  Nice use of plate tone in the sky. 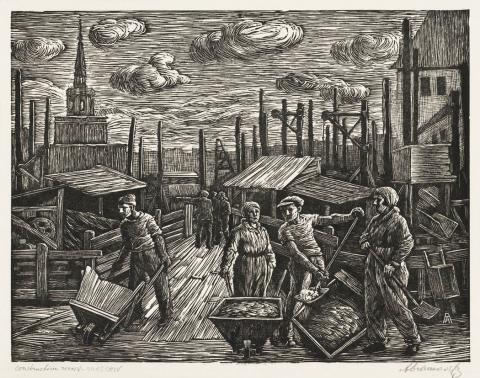 A remarkable original linocut, image size 8 3/4 x 11 1/2 inches, c. 1930s, pencil signed and titled. Albert Abramovitz was known for his dramatic images with sharp social commentary, many portraying the hardships of daily life for working class people in both America and Russia. Born in Latvia, Abramovitz studied at the Imperial Art School in Odessa and the Grande Chaumiere in Paris. While in Paris he was a member and juror of the Paris Salon, and won the Grand Prize at the Universal Exposition in Rome and Turin, Italy. In the 1920s Abramovitz emigrated to America, first the west coast then settled in New York City where he lived for the rest of his life. He created a number of prints for the WPA, and his work was included in exhibitions by the Union of American Artists, the American Artist's Congress, the ACA Gallery and the National Academy of Design.