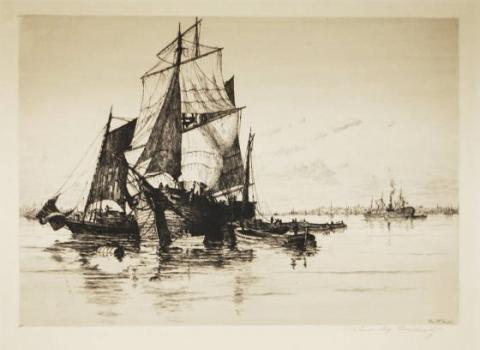 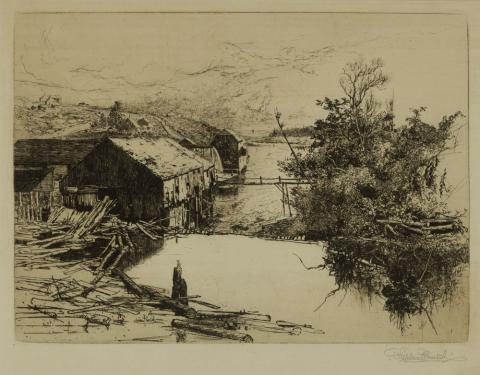 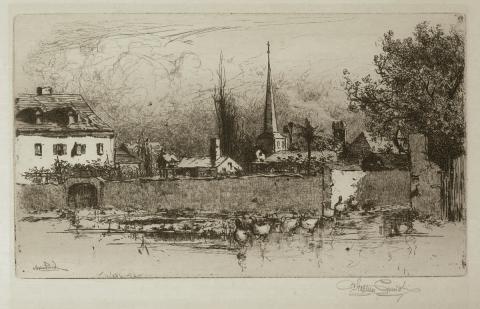 This is an original etching by American 19th century printmaker, Stephen Parrish.  The title is: A Showery Day, St. Augustine  This image was created and printed in 1884.  The image measures 5 5/8X9 5/8 inches.  It is hand signed in pencil and has the title written in the artists hand in the lower margin.  Printed on a medium weight wove type paper.  This image appears in the Schneider catalog as image number 100. 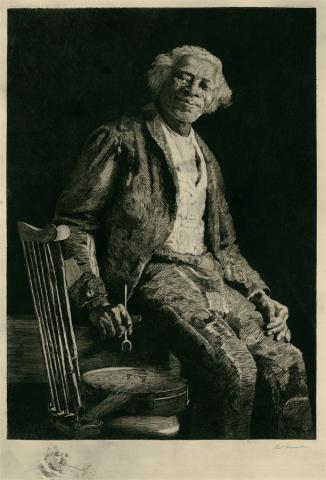 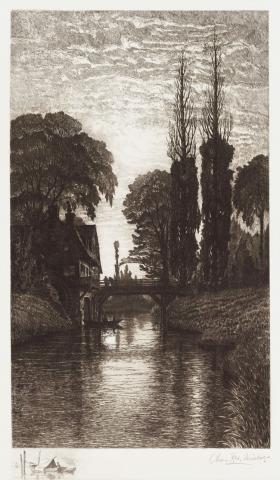 This is a luminous original etching of a rural watermill at twilight by American artist Charles Mielatz. The image size is 19 3/4 x 11 3/4 inches, published in 1886 by Fishel, Adler & Schwartz, remarque in the lower margin, pencil signed. Mielatz was born in Germany but came to the United States as a young boy, studying at the Chicago School of Design, although much of his etching technique was self taught. Mielatz was a member of New York Etching Club and was one of the first etchers elected to the National Academy of Design, where he was also the chief instructor of etching for many years. This is one of Mielatz's early etchings, which like most of his early work is done in the American painter-etcher style with a tonalist inspired sense of fading light.

A Tower of Cortes, Mexico 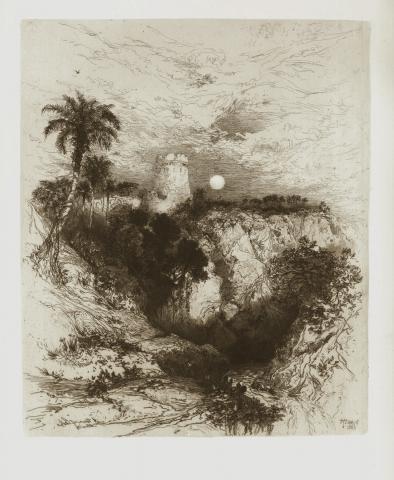 This is an original etching by American artist Thomas Moran.  The title of this work is: "A Tower of Cortes, Mexico", it was created and printed in 1883.  The image measures 12X9 3/4 inches.  Very rich impression, plate signed only.  This etching was printed on a medium weight buff toned wove type paper. 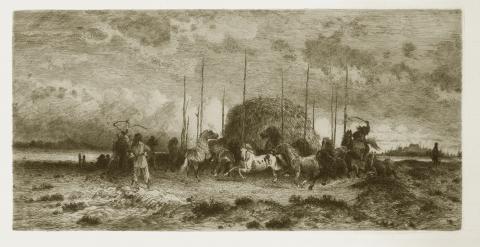 This is an original etching by American artist Peter Moran.  The title is: "Harvest at San Juan Pueblo", this etching was created and printed in 1883.  The image measures 6X12 1/4 inches.  This image is not pencil signed.  A scene of the Pueblo Indians of New Mexico Herding horses. 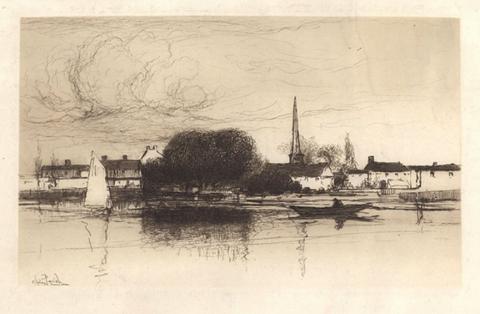 The Half Dome - View From Moran Point 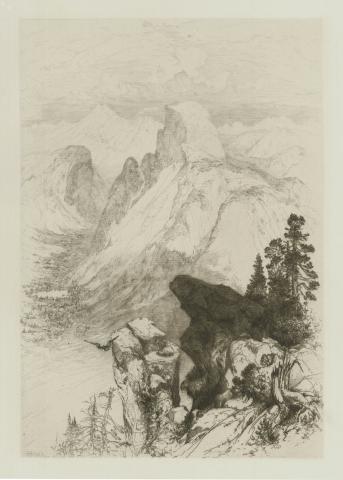 This beautifully etched image by Thomas Moran measures 11 5/8 x 8 inches, is plate signed and dated. Thomas Moran was a leading artist of the American etching revival, and in 1877 was one of the founders of the New York Etching Club. Moran was known for his experimentation in all aspects of the etching process, and his ability to beautifully capture the atmosphere and energy of the American landscape. This view of the rugged landscape of Half Dome, the plunging depth of the valley and the towering height of the mountains is accentuated by Moran's richly inked rugged foreground and the contrasting, lightly etched lines of the background giving one the sense of the hostility of the environment. 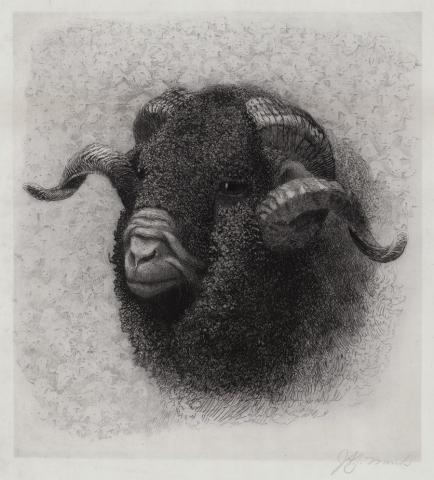 Hauling by the Capstan, Yport, Normandie 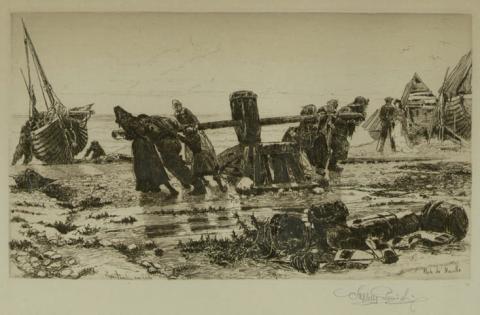 Fishery on the Dee 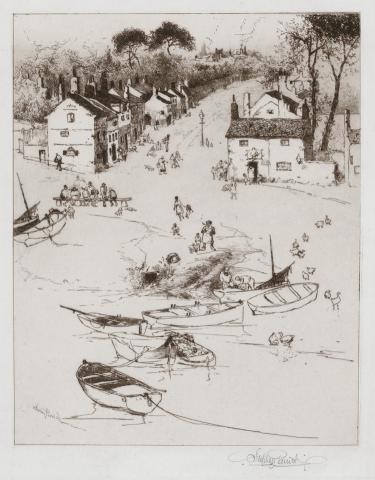 A very fine original etching by American artist Stephen Parrish, this image is one of three images Parrish created of Chester, a small walled town near Liverpool, England. The image size is 9 1/4 x 7 3/8 inches, 1884, state I/II, before the remarque in the lower margin, cat: Schneider- 107, pencil signed. 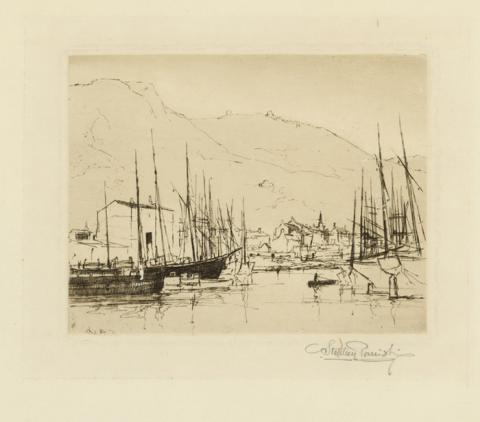 Tween the Gloaming and the Mirk, When the Kye Came Hame 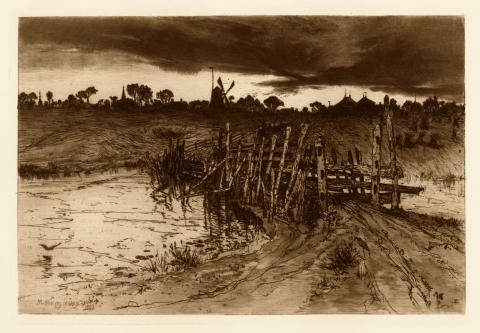 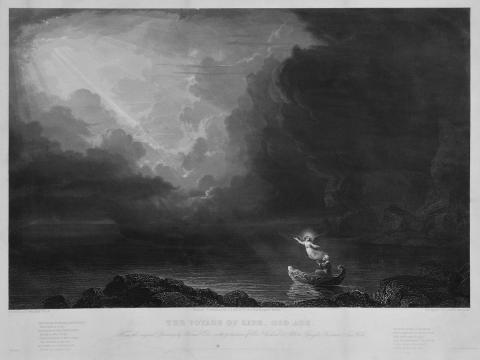