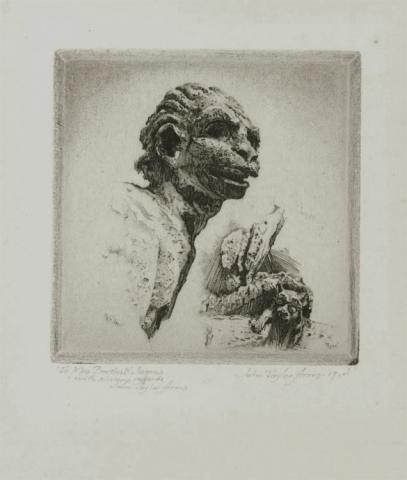 This is an original etching by John Taylor Arms, one of his Gargoyle Studies titled: "Ugly Devil", it was created and printed in 1924, the image measures 3 1/8X3 3/16
inches. The edition was 100 signed proofs. This one was signed twice in pencil once as part of a dedication in the lower left border.

Food after the Flood 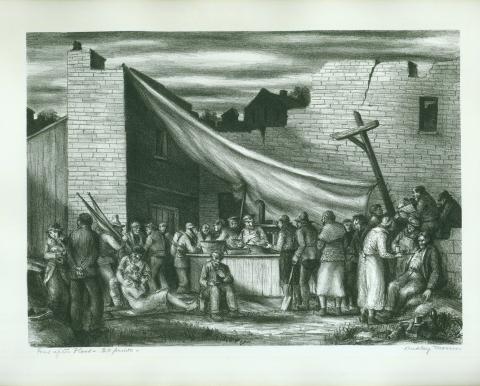 This is a pencil signed lithograph by American artist Dudley Morris.  Created cira 1940 this image is titled: Food after the Flood.  It has an image size of 9 3/4X13 1/2 inches.  It was from the edition of only 25 impressions.  Printed on a medium weight wove type paper. 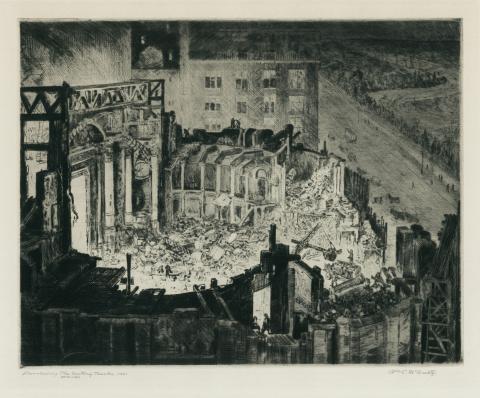 This is an impressive etching and drypoint by American artist William C. McNulty. The title is: "Demolishing the Century Theater, 1931" A great industrial study done in New York City. This etching has an image size of 9X11 1/4 inches. Pencil signed and titled. Done in an edition of 75 proofs.

The Woolworth, Through the Arch 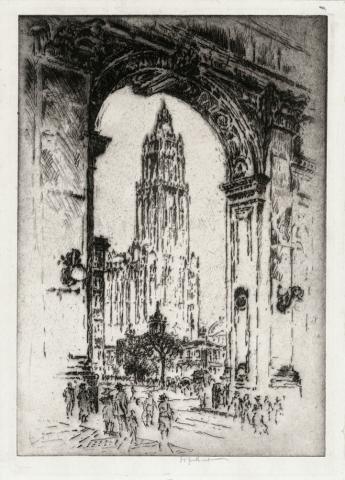 A great New York etching by Joseph Pennell, measuring 9 7/8 x 6 7/8 inches, published in 1921, cat: Wuerth-785, pencil signed "JoPennell imp", the "imp" indicating that Pennell printed this impression himself. This is a early trial proof of the published state. 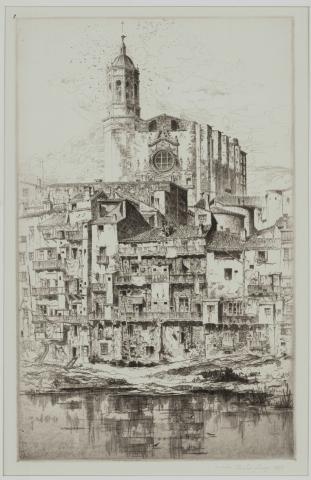 An excellent example of the artistry of the American printmaker, John Taylor Arms. This image measures 12 1/4 x 7 3/4 inches, pencil signed and dated 1925, from his Spanish Church Series #5, printed by Frederick Reynolds in an edition of 152, cat: Fletcher 164. John Taylor Arms was one of the foremost American printmakers of the 20th century, known for his exquisite compositions and exacting details which gave his etchings a very realistic, almost photographic appearance. He specialized in images of European architecture and cathedrals. 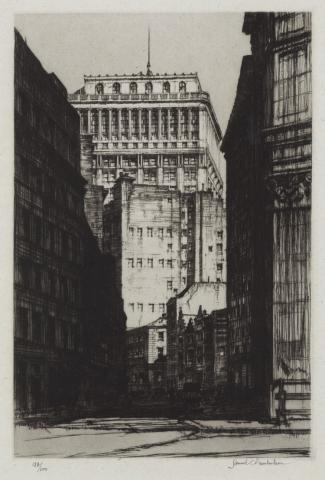 This is a great New York etching, image size 8 5/8 x 5 3/4 inches, 1929, cat: Chamberlain-86, pencil signed and numbered below the image, titled in the lower margin. A rich impression on a grey toned laid type paper with ample margins and deckled edges. Samuel Chamberlain studied architecture at MIT, but interrupted his studies to serve in France during WWI. After the war, Chamberlain worked as an architectural draftsman in Boston before leaving the US to travel throughout France and Europe. During his time overseas, Chamberlain began sketching the countryside and architecture, eventually studying at the Royal College of Art in London. He became well known for his carefully rendered etchings and drypoints of both European and American buildings and cityscapes. 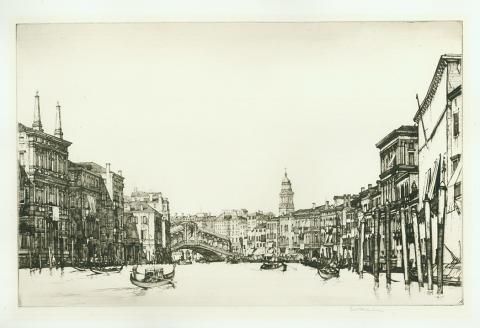 This is an original etching and drypoint by American artist Louis Rosenberg.  The title is: The Grand Canal, Venice, it is printed on a medium weight laid type paper.  This etching was created and printed in 1927.  The image measures 8 7/8X13 7/8 inches.  Hand signed in pencil lower right border, very fine condition, nice use of plate tone in the sky and water.  A very rare image, Rosenberg at his best!!!... 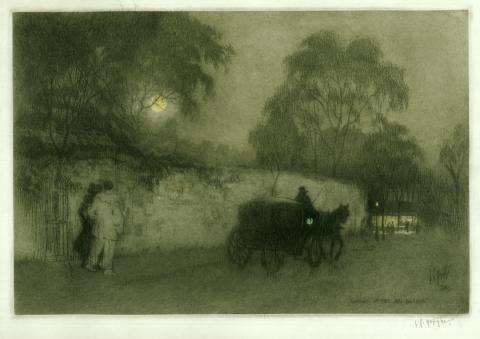 This is an original aquatint etching by American artist Lester G. Hornby.  It is titled: Marabout Tombs, Tunis, 1909, and is described in the plate as: "Evening of the Bal Masque", the image measures 9 1/2X14 1/2 inches, pencil signed lower right corner.  Printed on a medium weight laid type paper.  This is a very scarce etching.  It appears in the Falk catalog as image number 301. 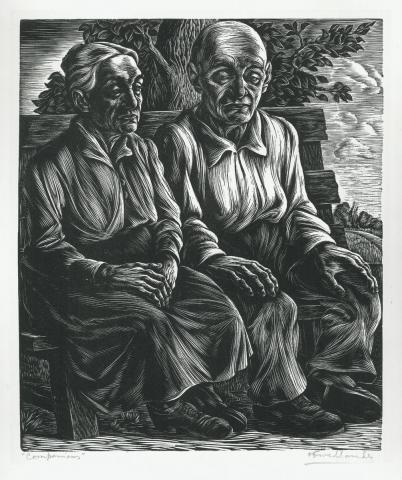 This is an original wood block print by American artist Isac Friedlander.  Created circa 1930 this image is titled: "Companions", It is pencil signed and titled in the lower border.  The image measures 11 3/4X9 3/4 inches.  Printed on a medium weight wove type paper.  Isac Friedlander (1890-1968) was born in Mitau, Latvia. He was arrested in 1906 and imprisoned by Russian authorities for anti- Czarist Political activities from 1906 to 1912. He studied art at the Academy of Rome, Italy from 1913 until 1917. He was a friend of Russian writer Maxim Gorky. Friedlander began his printing career in 1915. In 1917 he repatriated to Russia during the Kerensky regime, but in 1929 Friedlander immigrated to the US with the encouragement of his cousin Joseph Hirshhorn. 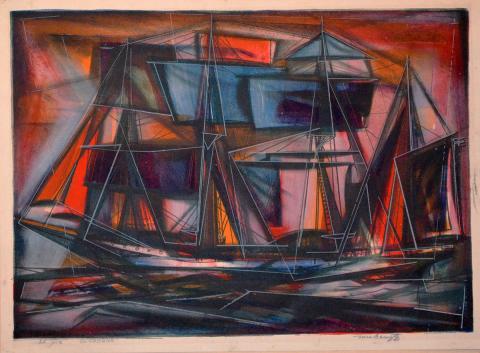 This is an original multi Color lithograph by American artist Ture Bengtz.  This pencil signed image is titled: Olivebank and editioned as 1/12.  The image measures 13 3/4X19 inches. A fineabstraction of  The windjammer Olive Bank.  Created and printed circa 1950.  A very rich impression. 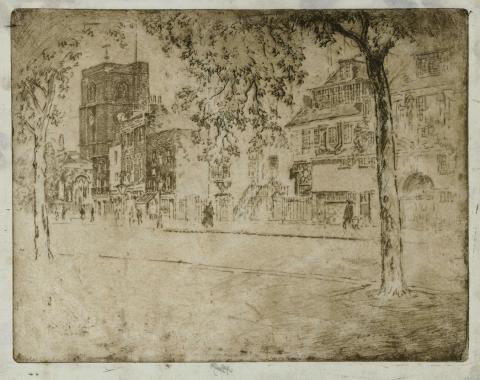 Destroyers in Wet Basin at Federal Shipbuilding and Drydock Company 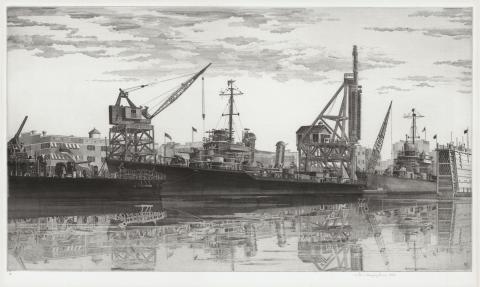 A superb original etching by John Taylor Arms, this image measures 10 x 17 1/4 inches, published in 1943, state III/III, cat: Fletcher- 377, U.S. Navy Series #2, pencil signed and dated. This image shows the ships U.S.S. Radford, Quick, and Mervine at the Federal Shipbuilding and Drydock Company, South Kearney NJ. John Taylor Arms was an extremely talented and successful artist in the early 20th century, known especially for his exquisite renderings of French cathedrals and other European architecture. He served as a naval officer during WWI and at the onset of WWII was ready to serve again, but did not meet the Navy's physical requirements. Instead, Arms created his "U.S. Navy Ship Series," to support the American war effort. 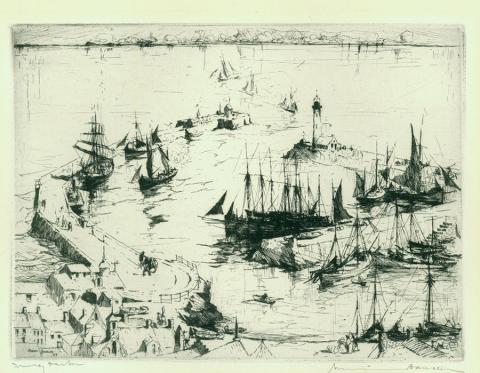 This is an original etching by California artist  and printmaker,, Armin Hansen.  The title is: Snug Harbor.  It was created and printed in 1928, and exhibited through the California Printmakers Society.  The image measure 6X8 inches.  Hand signed in pencil lower right border, in very nice condition 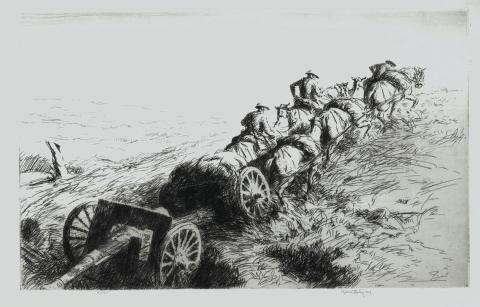 This is an original etching by American artist Kerr Eby.  It is titled: "In the Open" this image was based on the artist's WWWI experiences in France.  The image measures 7 7/8X12 3/4 inches.

It was created and printed in 1927 in an edition of 90 impressions.  This etching is pencil signed by the artist lower border.

View from the Top 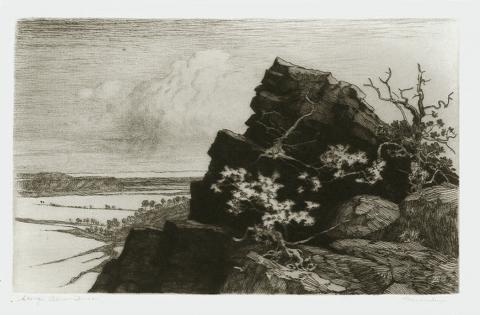 This is a fine pencil signed etching and drypoint by American artist George Elbert Burr.  We are unsure of the title or location, certainly a view of the Southwest.  The image measures 4 3/4X7 3/4 inches, printed on a medium weight wove type paper.  This image does not appear in the Seeber catalog.