This is an original etching by American artist Stephen Parrish.  The title of this work is: "Gloucester Ferry, 1881", it was created and printed in 1881, this is the larger plate.  It was recreated in a smaller version a year later.  The image measures 9 3/8X14 5/8 inches.  It is pencil signed lower right border and plate signed l.l. and titled l.r. image with the Stephen Parrish number 47, meaning this was his 47th etching that he created.  "To the right, a schooner lies at anchor.  Beyond, a foot bridge leads down to a small dock, on which are two figures" (Rona Schneider) 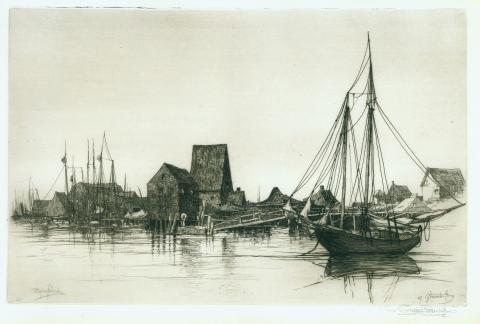