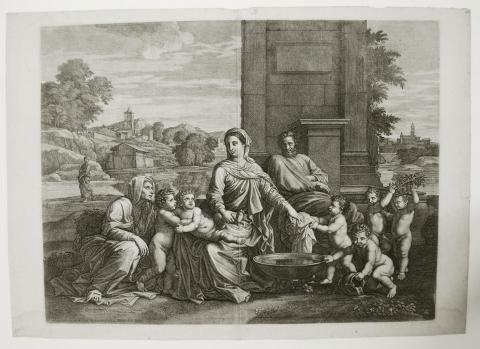 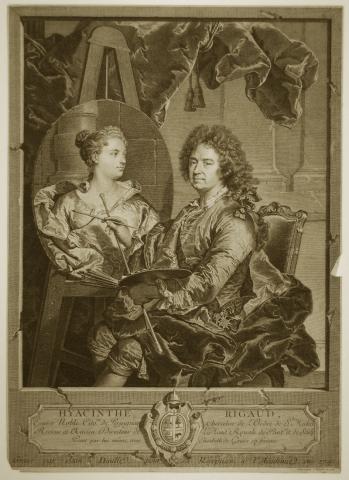 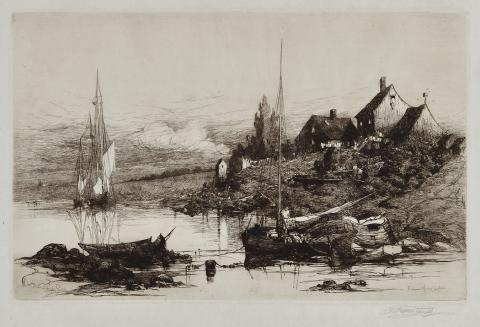 This is a very fine original etching by Stephen Parrish, published by Keppel in 1881. The image size is 12 x 19 inches, cat: Schneider-49, plate signed and titled, pencil signed. According to Schneider, this atmospheric image of the Massachusetts shore was one of Parrish's most popular etchings. This print features a very richly inked impression with beautiful plate tone, printed on a medium weight wove type paper with ample margins. 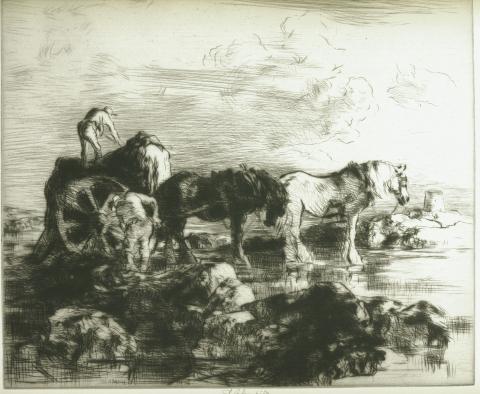 This is an original etching by British artist Edmund Blampied.   The title is: "The Vraic Season (No 1)" , it was created and printed in 1936 in an edition of 125 for the American College Society of Print Collectors.  The image measures 12X14 1/4 inches.  Very fine condition, hand signed in ink.  Vraic is seaweed that was harvested on the Channel Islands and used for potato fields.  The usual method was gathering it up with horse drawn carts.  A rich impression. 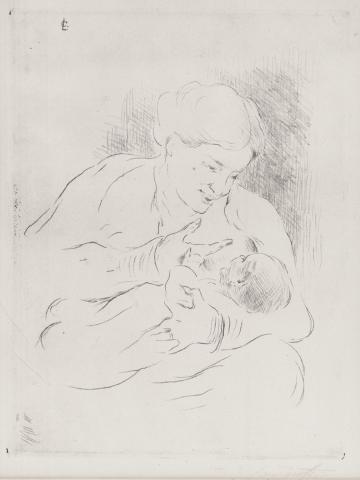 A soft ground etching by German Expressionist artist Lovis Corinth, this image measures 12 1/2 x 9 3/8 inches, published in 1910 in an edition of 50 impressions, state I/III, cat: Schwarz-41,"LC" monogram in the upper left of the image, a faded signature below the image, framed. Corinth began his career studying at the Academy of Fine Arts Munich and went on to study under Bouguereau at the Academie Julian in Paris. He later returned to Germany and became a member and eventually president of the Berlin "Sezession." Corinth is best known for his prints and paintings of figures and portraits.

Engraving after Giulio Romano; Holy Family "with the Lizard" Prov. Gray: 753; Thies: The picture is in the Gallery of the Pitti palace in Florence. Passavant, Rafael, 11.No.230,Copy a.A repetiton of Raphael's Holy Family "under the Oak Tree" in the Madrid Gallery. Passavant,II.230.
Impression with the engraver's address 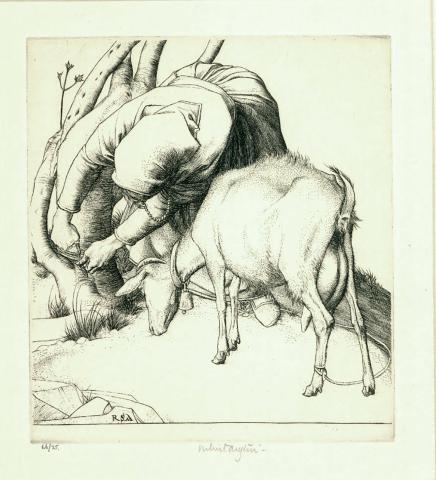 This is a very fine line engraving by British artist Robert Austin, The subject is: Woman Tethering a Goat, this image was created and printed in 1928.  It is pencil signed and numbered 66/75 lower border.  The image measures 5 1/2X4 15/16 inches.  Printed on a medium weight laid type paper.  "Robert Sargent Austin was a highly respected illustrator and engraver, sometimes regarded as the last great English engraver. He taught at the Royal College of Art and was eventually elected president of the Royal Society of Painter-Etchers." 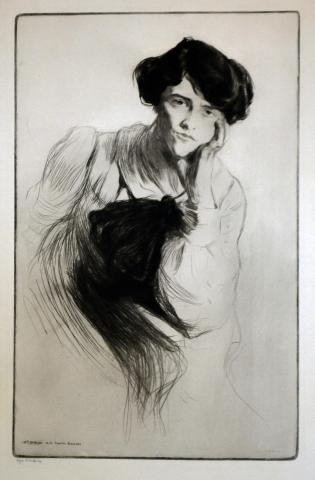 This is a very fine etching with drypoint by French artist Edgar Chahine (1874-1947)  The title of this work is: "Mademoiselle Delvair de la Comedie Francaise,", it was created and printed in 1901, pencil signed lower left border.  The image measures 18X11 1/2 inches.  Printed on a medium weight wove type paper.  This image appears in the Tabanelli catalog as image no. 73.  It also appeared in the Holme's book, Modern Etching and Engraving, published 1902. 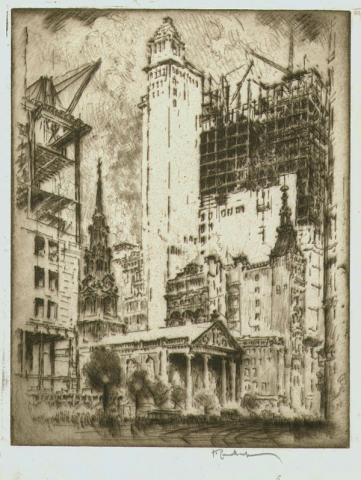 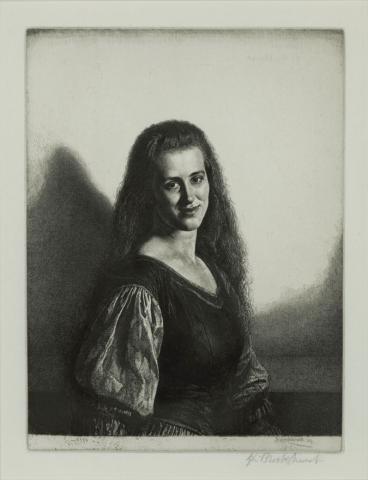 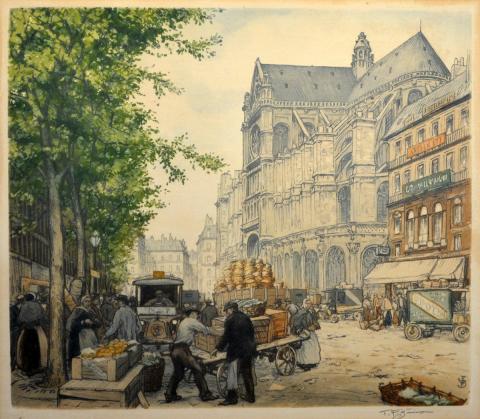 This soft ground etching and aquatint was created by Austrian artist Tavik F. Simon.  It is titled: Les Halles Et L' Eglise Saint Eustache, Paris.  A fine view of Notre Dame and the street life of Paris.  This etching was created and printed in 1926 and is described as an artist Proof in the Novak Catalog, numbered as: 1926AP3.  The image measures 13 1/4X15 inches.  Pencil signed lower right and has an edition number of 16. In an early Frame with French matting. 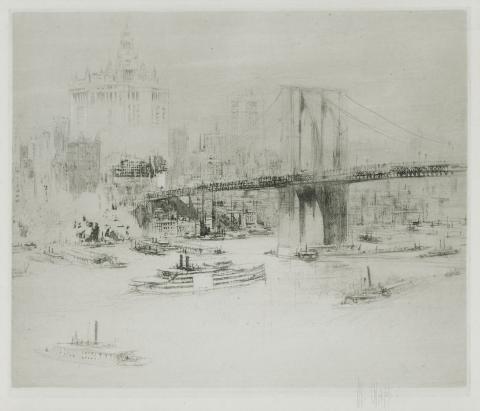 This is a fine drypoint etching by British artist William Walcot.  This image of the Brooklyn Bridge was done in his series of 5 etchings of New York City published in 1923 as a portfolio.  This etching is hand signed in pencil in the lower border.  The image measures 8 1/4X9 3/4 inches.  Nicely Framed with archival materials. 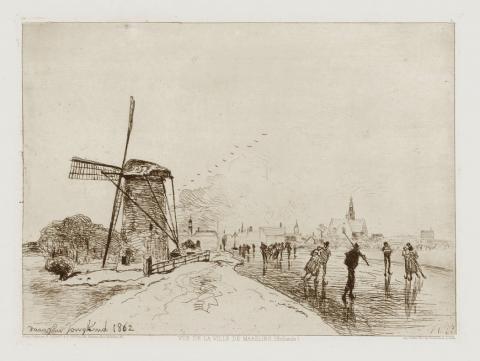 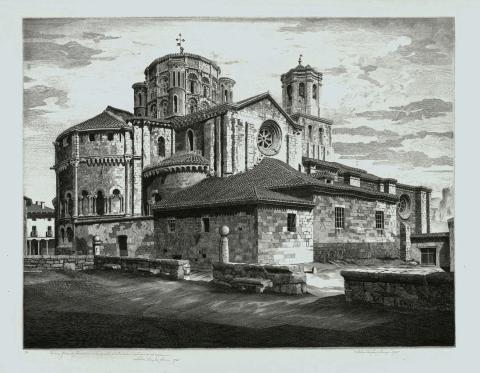 This is a fine detailed etching by American artist John Taylor Arms.  This image from his Spanish Church series is titled: La Colegiata, Toro, it was created and printed in 1935 in an edition of 153 impressions.  This pencil signed image measures 9 3/4X12 3/4 inches.  It is inscribed, gifted to: Mr. and Mrs Andrew Daglish (The British artist and Friend of Arms)  Printed on an antique laid type paper.  This impression was printed by David Strang, one of Arm's most trusted printers of his editions.