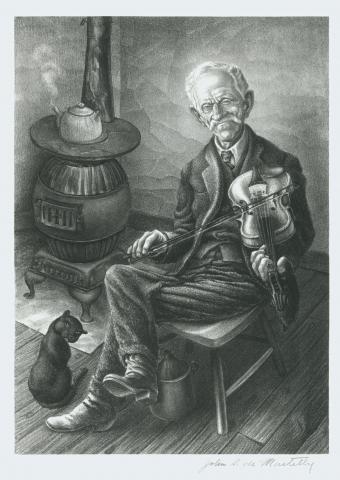 This is an original lithograph by American artist John S. deMartelly.(1903-1980)  This image is titled: "Two Old Toms", it was created and printed in 1939 in an edition of 250.  The image measures 11 1/4X8 inches.  It appears in the deMartelly as Zink 64.  This was originally sold through Associated American artists in New York.

A Dwelling in Aragon 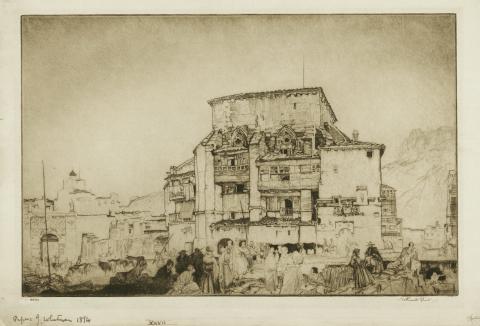 This is a fine dry point etching by British artist Sir William Russell Flint.  The title is: "A Dwelling in Aragon", it was created and printed in 1929 in an edition of 75.  This is hand signed in sepia ink, editioned as XXVII and inscribed as printed on Whatman 1874 antique laid type paper.  The image measures 8 3/4X13 1/2 inches.  Fine use of plate tone in the sky, a rich impression. 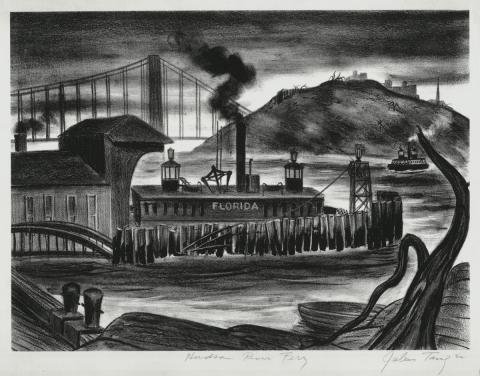 The Sacrifice of Abraham 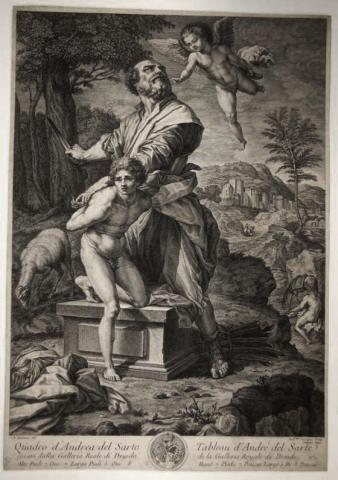 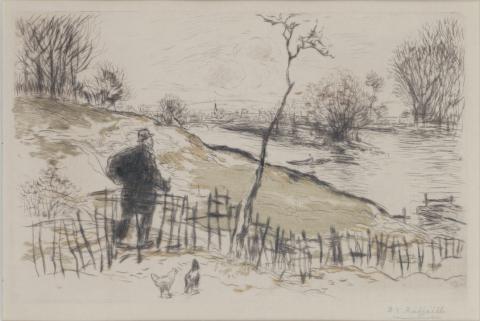 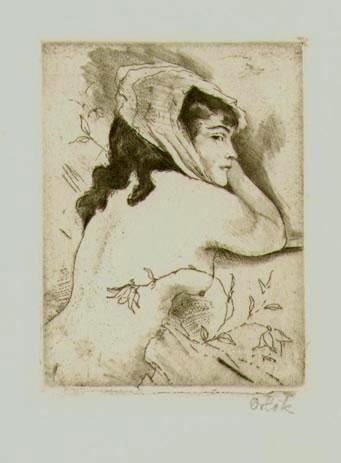 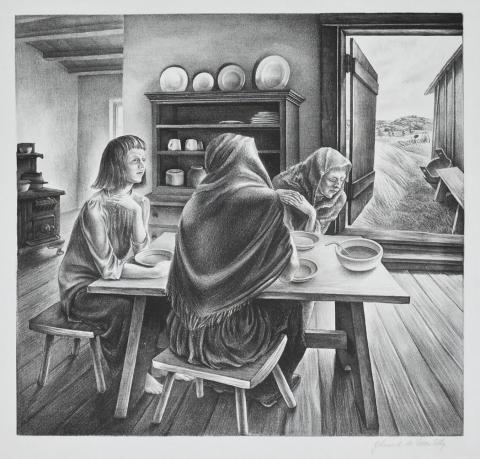 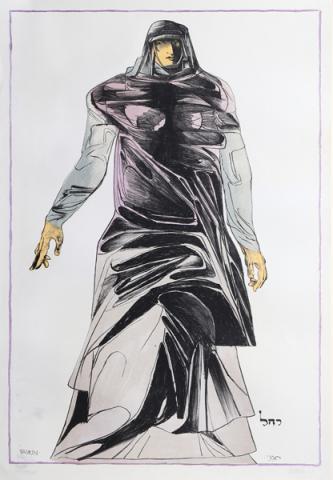 This is an original color lithograph by American artist Leonard Baskin (1922-2000) The title of this work is "Rachel", it was created and printed in 1976 in an edition of only 100. The image is quite large measuring 37 1/2X26 inches. It is currently framed. Pencil signed lower right within the edge of the image. 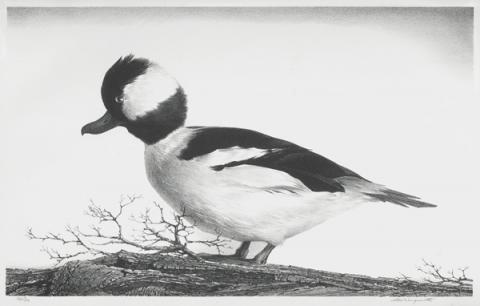 This is an original hand signed lithograph by American artist Stow Wengenroth. The title of this piece is "Bufflehead", it was created and printed in 1967 in an edition of only 50 signed proofs.
The image measures 9 3/4X15 7/8 inches. This lithograph appears in the Stuckey catalog as image number 312. Very good condition, matted not framed. 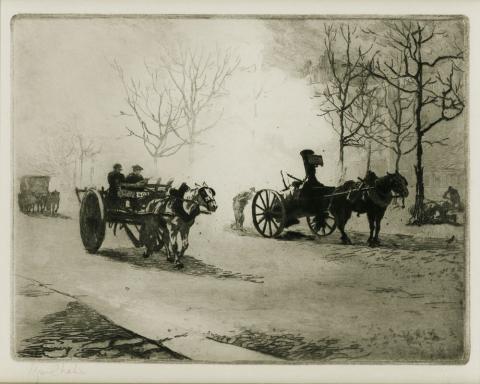 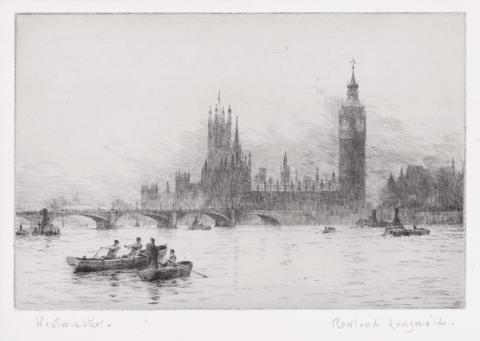 This is an atmospheric original etching by British Marine artist and Lieutenant-Commander of the Royal Navy, Rowland Langmaid. Etching with drypoint, image size 5 5/8 x 8 inches, c. 1930, pencil signed and titled. A beautiful image of the silhouette of Big Ben rising above the busy Thames River.

A By-Way in Trenton 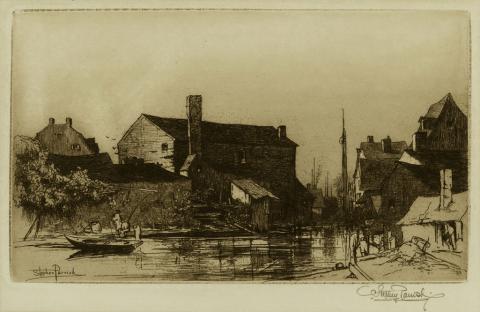 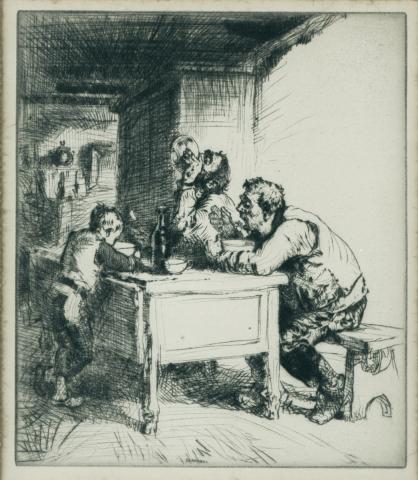 This is an original drypoint etching by British artist Edmund Blampied, created and printed in 1920 the title of this work is: "Soup", showing laborers at dinner.  The image measures 9X8 1/8 inches.  Printed in an edition of 100.  This impression is hand signed in pencil in the lower  border. This image was illustrated in Print Collector's Quarterly in 1926. 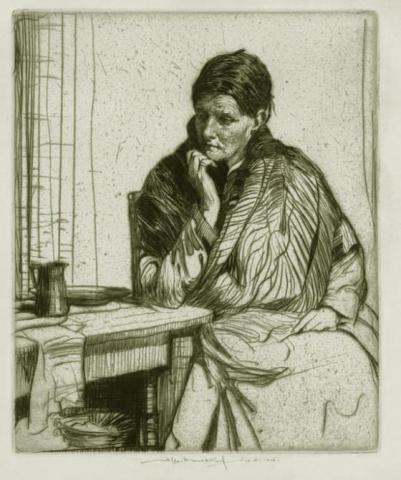 Etching, image size 8 3/4 x 7 1/4 inches, 1923, subsequent to Hardie, edition of 100, pencil signed, artist blindstamp. We have two impressions of this print in our inventory. 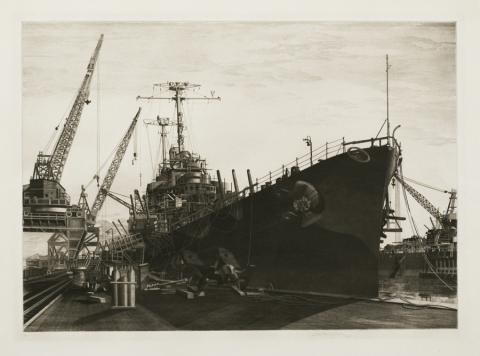 A beautiful etching by John Taylor Arms measuring 12 3/8 x 17 3/8 inches, pencil signed and dated, printed in 1945, state II, cat: Fletcher-390. John Taylor Arms was an extremely talented and successful artist in the early 20th century, known especially for his exquisite renderings of French cathedrals and other European architecture. He served as a naval officer during WWI and at the onset of WWII was ready to serve again, but did not meet the Navy's physical requirements. Instead, Arms created his "U.S. Navy Ship Series," to support the American war effort.