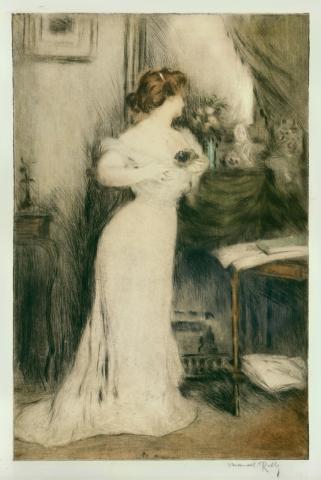 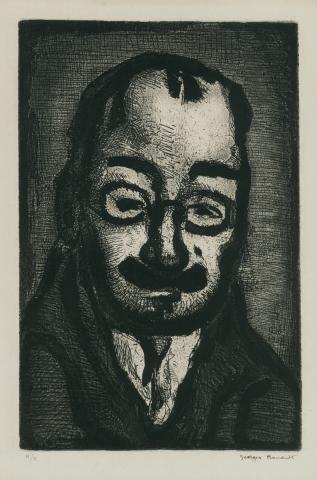 This is an original aquatint etching by French artist Georges Rouault titled: " Le Director de Theatre", The Theater Director. From the series "Reincarnations of Pere Ubu", This is a rare hand signed impression lower right and also inscribed as M/O lower left. This etching was created and printed in 1928. The image measures 12X7 3/4 inches. It is printed on a medium weight wove type paper. Some light toning in the border area. Rouault was known to experiment with his etchings, this one not only has aquatint etching but also some roulette work, drypoint and use of a burnisher. A very rich heavily inked impression. Catalog Chapon-Rouault 27.c 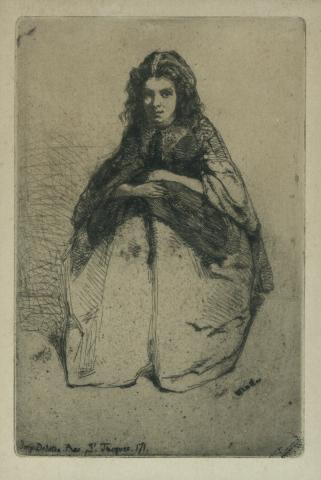 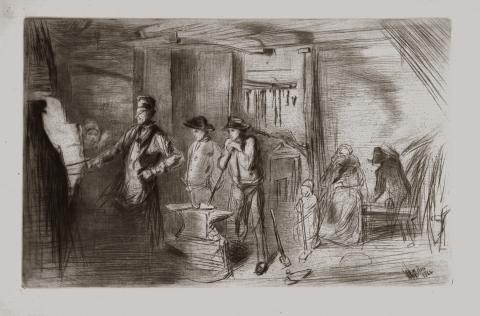 This is an original etching and drypoint by American artist James M Whistler.  The title is "The Forge", An interior view of the Blacksmith and his apprentices.  The image printed on a thin Japan type paper has in image size of 7 5/8X12 1/2 inches.  Extensive use of plate tone, a rich impression, This impression is the 6th state of 6 prior to the cancellation of the plate.  It was created in 1861 as part of his series, "The Thames Set"  It appears in the Kennedy catalog as image number 68.  A fine image in very nice condition. 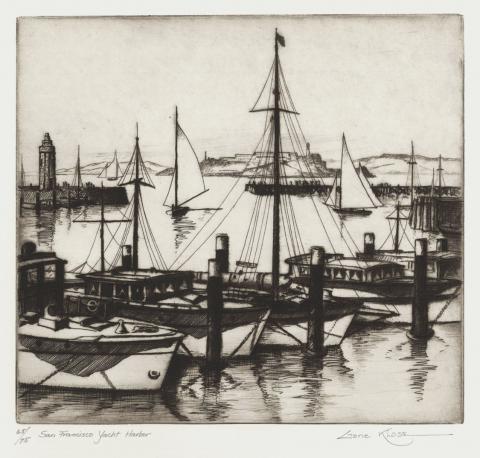 An early etching by Gene Kloss, this is a very richly inked scene of boats moored on the quiet harbor waters of San Francisco Bay. The image size is 9 x 10 inches, published in 1935 in a small edition of 75, pencil signed, titled and numbered. Gene Kloss was born in California as Alice Geneva Glasier, changing her name when she married the poet, Phillip Kloss in 1925. On their honeymoon, the Kloss's traveled to and fell in love with Taos, New Mexico. For over a decade they split their time between Taos and Berkely, CA; Gene Kloss becoming a central figure in the artistic communities of both states. This etching is in pristine condition and features a richly inked impression with superb plate tone on a heavy weight wove type paper. 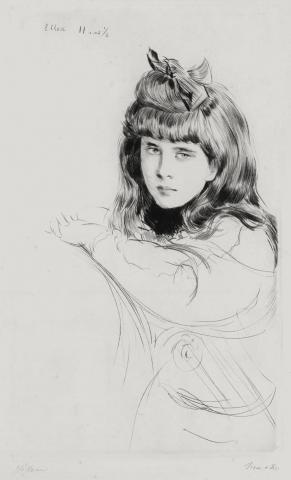 Etching with drypoint, image size 15 1/2 x 9 1/2 inches, c. 1890, edition of 20, pencil signed. Helleu began his art career when he enrolled at the Ecole des Beaux Arts and worked as an apprentice for Theodore Deck, decorating ceramic plates with women's portraits. He became friends with many artists of La Belle Epoch, including John Singer Sargent, Whistler, Tissot, Monet and Rodin, and became well known for his elegant portraits of women of French society. The young girl in this portrait is Helleu's daughter Ellen. 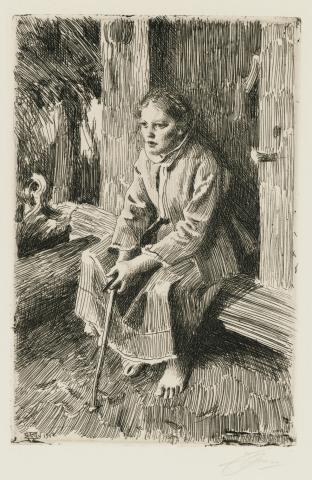 C. 1912. Pencil signed in the lower right. Plate initialed and dated in the lower left. Plate measures 11 3/4 x 7 3/4 inches on 16 1/2 x 11 1/2 inch watermarked Van Gelder Zonin laid paper. Catalog: Hjert and Hjert 209. A rare print. This is an excellent portrayal of a pensive woman with a rich drypoint burr. Anders Zorn's artistic talents were obvious at an early age. At 15 he entered the Royal Swedish Academy of Art in Stockholm and at 20 years old, at a student exhibition, he entered his watercolor painting "In Mourning" which now hangs in the National Museum in Stockholm. This recognition was the start of a long and accomplished career for Zorn. 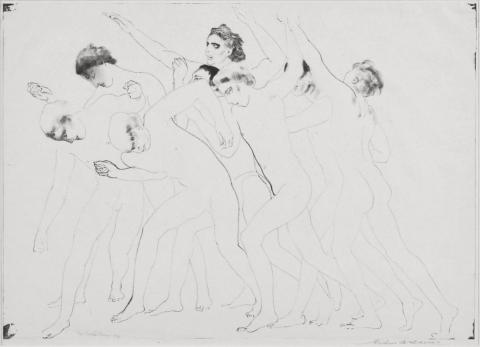 This is a very cool lithograph on zinc, image size 12 5/8 x 17 7/8 inches, 1919-1920, from a very small edition of 27 or fewer impressions, cat: Czestochowski-134, printed by Bolton Brown, pencil signed. Provenance: The Cleveland Museum of Art. Davies was a truly remarkable artist of the late 19th and early 20th centuries known for his dreamlike etchings and lithographs. In his catalog raisonne of Davies work, Czestochowski writes "In a time of social, political, scientific and artistic upheaval, Davies hewed to an unwavering inner vision, one of classically graceful figures in an eternal dance with nature." This image is a beautiful homage to the ancient Greeks, which Davies portrays in his distinctive style that is at once quite classical and quite modern. 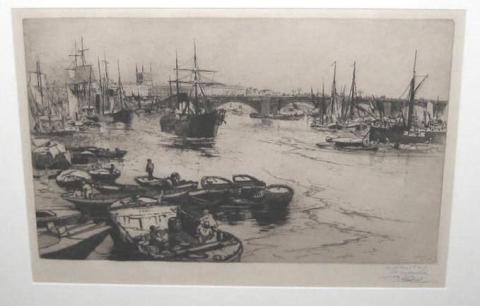 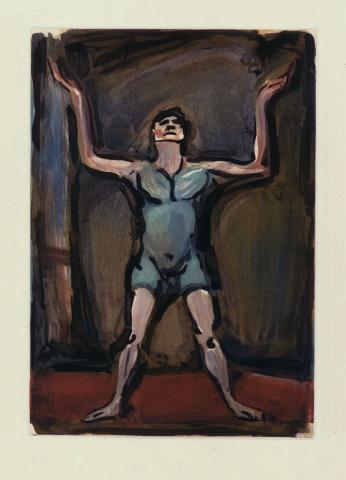 This color aquatint etching by the French Expressionist Georges Rouault measures 12 1/8 x 8 3/8 inches, plate signed, from the "Circus of the Shooting Stars" series, a group of eight color aquatints created in 1930, on Rives BFK laid type paper, initialed and dated in the plate, lower right, edition of 270, cat: Wofsy-212. 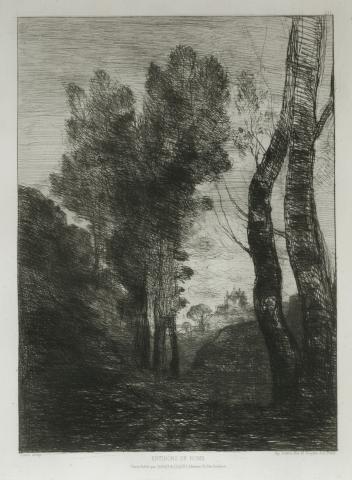 This is a fine example of the important etching by Jean Baptiste Corot. This etching is titled: Enviorns De Rome, it was created in 1866, this proof is the second state A. of three. Printed on Holland Paper, This printing had the addresses of:" Cadart and Luquet Editeurs, 79 Rue St Jacques 303 Paris" A rich impression, Catalog Delteil 6 II/III. Framed, previously sold by Kennedy Galleries in New York. 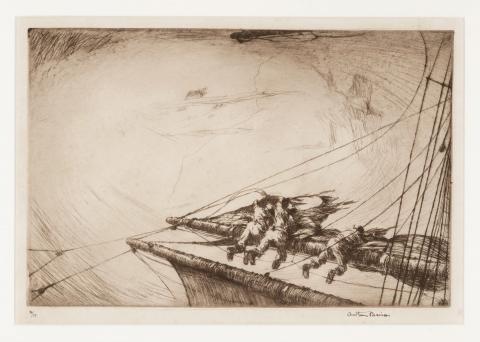 This dramatic scene by Arthur Brisco measures 8 x 11 3/4 inches and is ink signed and numbered. Published in 1924 on laid paper, cat: Hurst-94, framed. Briscoe was one of the finest marine artists' of the 20th. century. He studied at the Slade Art School and the Academy Julian in Paris and then spent the rest of his time sailing. He owned his own three ton cutter which he used to sail around the Essex coast. Also crewing on a Polish ship, he sketched every aspect of life on the boat. Most of Briscoe's etchings show sailing ships and the men who sailed them. His beautifully etched images present an invaluable historical record of the workings of the last great commercial vessels. 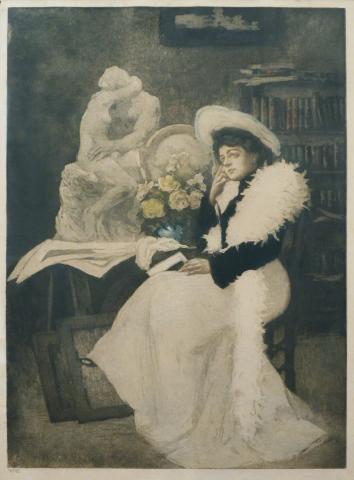 This is an original color aquatint and drypoint etching by French artist Manuel Robbe. This image is titled "Le Dernier Roman" The plate measures 20 1/2X14 1/2 inches. It is hand signed in pencil in the image and editioned as number 55. This etching is framed and originally sold by Merrill Chase Galleries, label on the back. 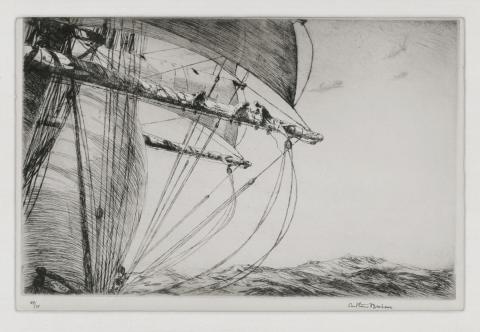 This etching by Arthur Briscoe measures 7 7/8 x 11 7/8 inches. Ink signed and numbered on cream laid paper, 1924. Cat: Hurst-85. Framed. Briscoe is known as one of the finest marine etcher of the 20th. century. He owned his own three ton cutter which he used to sail around the Essex coast. Also crewing on a Polish ship, he sketched every aspect of life on the boat. He studied at the Slade Art School and the Academy Julian in Paris.