Hauling the Net Aboard

This 1926 etching by master printmaker Arthur Briscoe measures 7 x 11 7/8 inches and is signed in ink and editioned as 38/75. Lable on backing with provenance from C.W. Kraushaar Galleries, NY. Members of the crew aboard the trawler "Guess Again" concentrate on hauling the days catch aboard. The forground figure is "Old Sam" a figure Briscoe used in many of his images. This richly inked image was exhibited at the Royal Academy in 1927. Briscoe studied at the Slade Art School and the Academy Julian in Paris and then spent the rest of his time sailing, becoming one of the most prominent British marine artists of the 20th century. He owned his own three ton cutter which he used to sail around the Essex coast. Also crewing on a Polish ship, he sketched every aspect of life on the boat. Most of Briscoe's etchings show sailing ships and the men who sailed them. His beautifully etched images present an invaluable historical record of the workings of the last great commercial vessels. 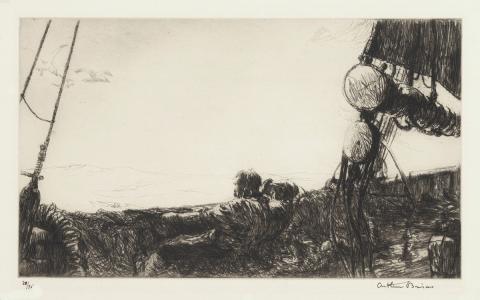