This is an original etching by American artist James Abbott McNeill Whistler.  The title is: "La Mere Gerard".  It was created in 1858 as part of the "French Set", created in Paris.  "The sitter probably posed for this etching in Paris in the autumn of 1858, but possibly earlier. Whistler was in Paris until 14 August, and on his return from the Rhineland, after 7 October 1858."  This printing is state 4 of 4 with the edition of the printers address at the bottom edge: "Delatre. Rue St. Jacques. 171".  This is a very rare early printing of that state, done on a sepia colored chin collet adhered to a thicker sheet of Wove type paper.  Under the plate mark is the Whistler pencil signed butterfly monogram.The image measures 5 1/16X3 1/2 inches.  This image appears in the Kennedy catalog as image number 11.  A beautiful, richly inked impression. This etching came to us with a partial label from Kennedy Galleries, N.Y.  Quite Rare! 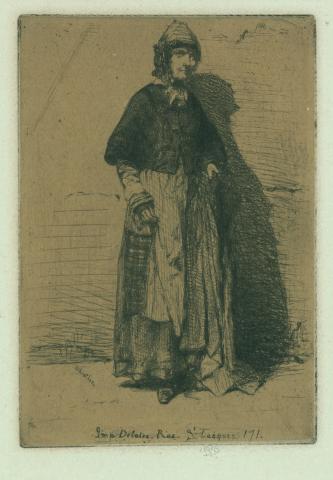