This is an original etching by American artist Isac Friedlander. It is titled: "Lest we Forget", it was created and printed in 1942 this one is editioned as 2/14. The artist's view of the aftermath of war in europe. The image measures 10 1/4X13 7/8 inches. It is hand signed, titled, dated and editioned in the lower margin by the artist in pencil.
Isac Friedlander (1890-1968) was born in Mitau, Latvia. He was arrested in 1906 and imprisoned by Russian authorities for anti- Czarist Political activities from 1906 to 1912. He studied art at the Academy of Rome, Italy from 1913 until 1917. He was a friend of Russian writer Maxim Gorky. Friedlander began his printing career in 1915. In 1917 he repatriated to Russia during the Kerensky regime, but in 1929 Friedlander immigrated to the US with the encouragement of his cousin Joseph Hirshhorn. 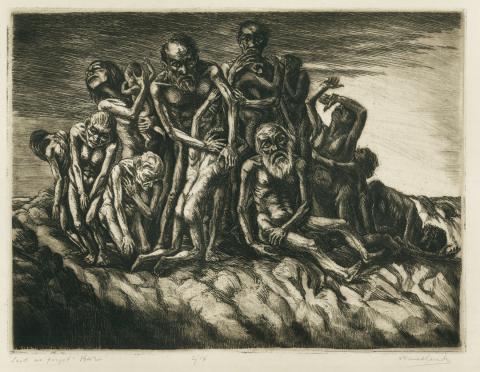