An atmospheric scene of Rockport, Massachusetts, this is one of Wengenroth's early lithographs, published in 1935 in a small edition of 50 impressions. The image size is 7 7/8 x 12 1/4 inches, cat: Stuckey-51, pencil signed. Stow Wengenroth was one of the preeminent lithographers of 20th century America, known for his atmospheric, incredibly detailed images of the New England landscape and coastline. He studied at the Art Students League and the Grand Central School of Art in New York, and in the summers studied with John Carlson in Woodstock NY and George Ennis in Eastport ME. In 1931 he had his first one man show at the MacBeth Galleries, beginning a long and very successful artistic career. 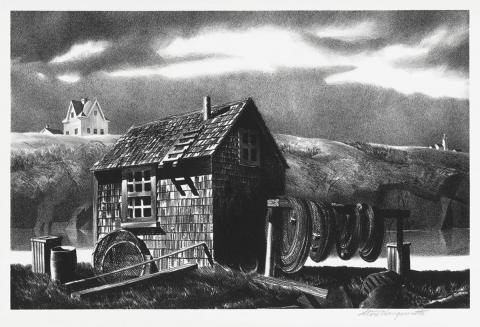