This 1928 original etching by Arthur Briscoe measures 13 3/8 x 8 3/4 inches, pencil signed and numbered, 10/75, cat: Laver 116, plate titled and dated, published by H.C. Dickins. This spectacular image was created at the height of Briscoe's popularity, depicting the dangerous and challenging daily routines aboard a seafaring vessel. Briscoe studied at the Slade Art School and the Academy Julian in Paris and then spent the rest of his time sailing, becoming one of the most prominent British marine artists of the 20th century. He owned his own three ton cutter which he used to sail around the Essex coast. Also crewing on a Polish ship, he sketched every aspect of life on the boat. Most of Briscoe's etchings show sailing ships and the men who sailed them. His beautifully etched images present an invaluable historical record of the workings of the last great commercial vessels. 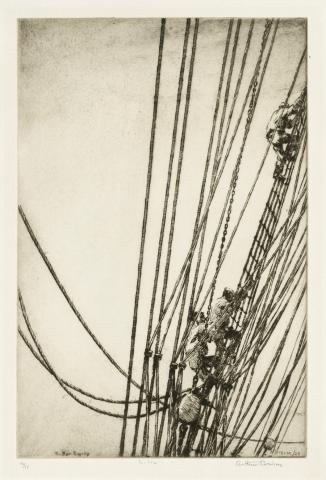