This expressive drypoint etching of ducks taking flight by Frank Benson was published in 1918 in an edition of 150. It is pencil signed on the lower margin. This image measures 7 7/8 x 9 7/8 inches with wide margins on a sheet size of 12 1/2 x 15 3/8 inches. Benson was a very successful painter and a member of "The Ten" along with Childe Hassam and J. Alden Weir, before he began his sporting paintings and etchings for which he is most widely known. In 1912, at the age of 50, Benson began his etchings and drypoints, mainly of wild fowl which he depicted with expressive lines and rich toning that exquisitely captured the life and energy of the wild birds. His etchings were in high demand from the very start, and have remained favorites for collectors ever since. He was a founding member of the Boston Guild of Artists and a long time teacher at the Museum School in Boston. 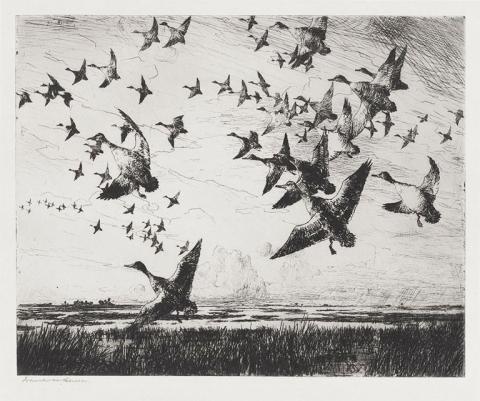