Etching from 1924. Catalog: Hurst 87. Edition of 75. The scene depicts some oyster dredgers on Buzzon (or Besom) Creek, near Briscoe's home in Colchester. The oyster industry there is now endangered, but Briscoe has captured it well. Signed in ink in the lower right, numbered "39" in the lower left. Plate measures 6 1/2 x 10 inches on 8 1/2 x 11 1/4 inch laid paper. A fine impression with good use of plate toning. riscoe studied at the Slade Art School and the Academy Julian in Paris and then spent the rest of his time sailing, becoming one of the most prominent British marine artists of the 20th century. He owned his own three ton cutter which he used to sail around the Essex coast. Also crewing on a Polish ship, he sketched every aspect of life on the boat. Most of Briscoe's etchings show sailing ships and the men who sailed them. His beautifully etched images present an invaluable historical record of the workings of the last great commercial vessels. 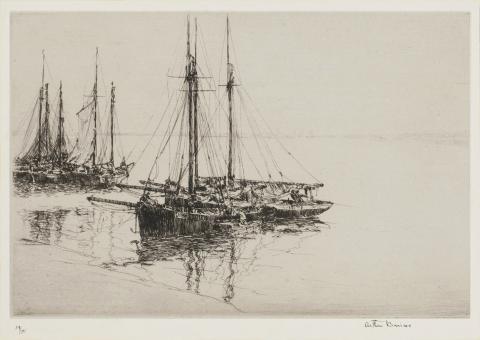