Weve recently acquired a large portfolio of original artwork illustrations created by Everett Shinn for numerous books and publications.  Many with remarks to the printer as to how it was to be reduced or changed for the book.  These were all absolutely by Shinn, many signed, some initialed, all can be found in the books that he illustrated mostly in reduced sizes and with the addition of type setting.  Fine examples of the Illustrators art from the mid 1930s-40s.  This image was created for the for the book, Poems of Childhood by James Riley, published by Gosset & Dunlap, in 1943.  This original ink wash drawing is annotated at the bottom edge as Title Page, page 5, to be done in black and white. Faintly written out above and below the image is the title "Poems of James Riley and illustrated by Everett Shinn" The image measures 11 X9 inches on a illustration board which measures 21X15 with publishers notes at the bottom edge.  The condition of the drawing is fine, the borders have some chipping and soiling, but the image looks fine. . A fine example of the  illustrators art "   This illustration was from the book "A Special collection of Riley's classic poems, with new illustrations by Everett Shinn created especially for this edition by the Artists and Writers Guild in 1943. 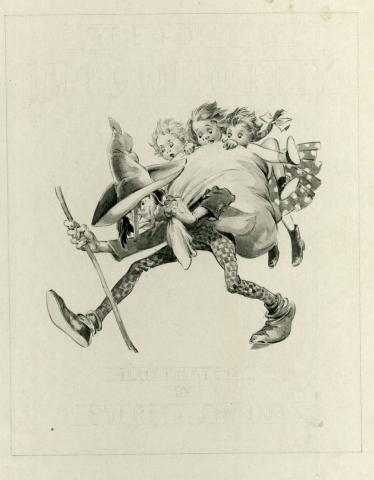