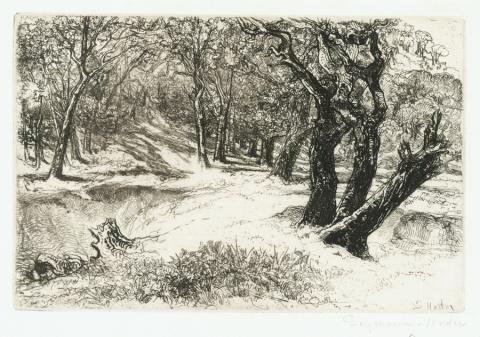 "The Three Sisters" by Sir Francis Seymour Haden measures 5 1/2 x 8 1/4 inches, pencil signed, 1868, state VI/V, cat: Schneiderman-119. Sir Francis Seymour Haden was one of the most important British etchers of the 19th century, along with his brother in law James Whistler. In addition to being a highly regarded artist he was a successful surgeon, accomplished author and dedicated angler. He was a founder and the first president of the Royal Society of Painter-Etchers and Engravers, and was knighted in 1894.

Under the Bridge, Japan

This is an oriignal etching, pencil signed by British artist Mortimer Menpes (1855-1938)  The title is: Under the Bridge, Japan, Nagasaki.  This etching was created and printed in 1896 in an edition of 50 impressions.  This has the "imp" after the artist's name which means that he printed this impression himself.  The image measures 4X11 7/8 inches.  It appears in the Morgan catalog as image number 165 I/III.  Printed on a light weight laid type paper. 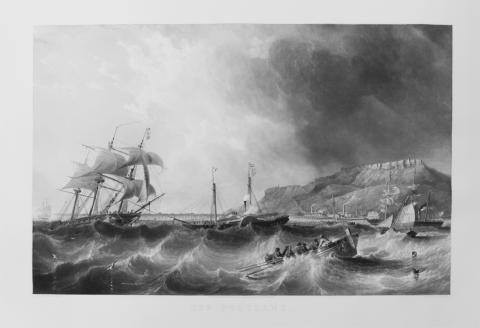 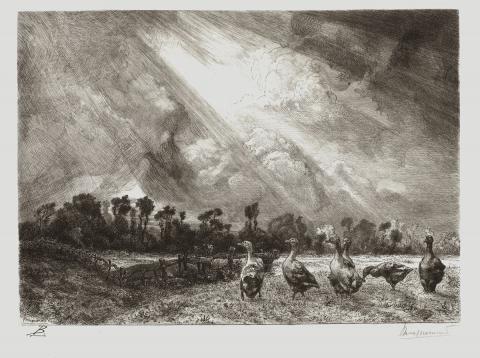 This is an original etching by French artist Felix Bracquemond.  It is titled: "La Nuee d'Orage", it was created and printed in 1882.  The image measures 10 3/16X13 7/8 inches.  It is hand signed in pencil and also with the stamped monogram in the lower border.  A great atmospheric image by this well known master of birds in nature. 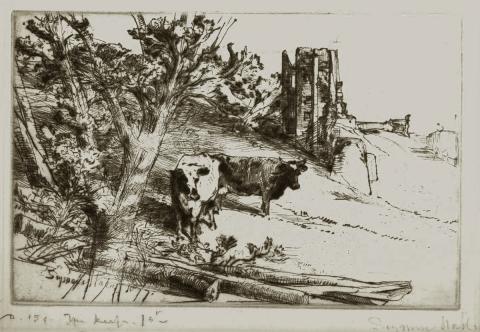 This is an artist proof drypoint etching by Sir Frances Seymour Haden.  The title: The Keep, is of Corfe Castle  in Dorset England.  This image was created and printed in 1877and is the third state of five.  It is inscribed as "Early Proof lower left and hand signed in pencil lower right.  The image measures 5 15/16X8 15/16 inches.  Printed on a light weight laid type paper.  This image appears in the Haden catalog as image number S-158. 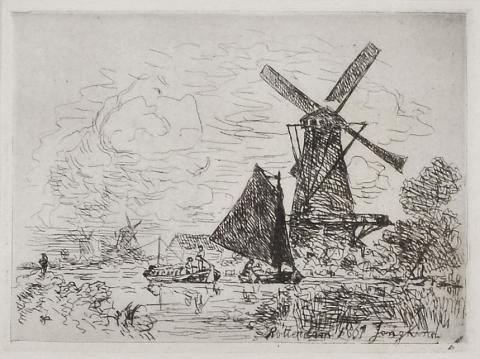 This etching by French artist Charles Meryon is titled: La Rue des Toiles, A. Bourges.  It was created in 1853.  The image measures 8 3/8X4 5/8 inches.  This impression is the 9th state of 9 which has the title typeset in the lower center border and the printers name in the lower right, A. Delatre.  Printed on a medium weight wove type paper. 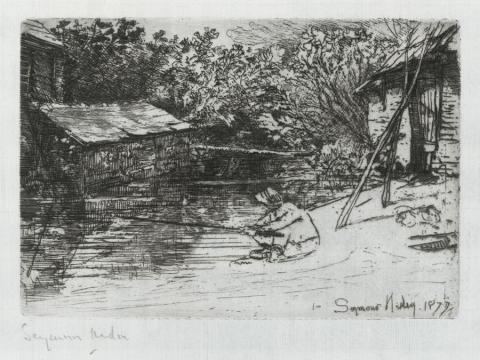 This is a very rare pencil signed etching by Sir Francis Seymour Haden; it is an early proof, from before the edition published in Hamerton's 1880 'Etching and Etchers'. The image size is 5 1/2 x 7 7/8 inches, 1877, cat: Schneiderman-161, plate signed and dated, pencil signed, a very rich impression on a laid type paper, framed. Sir Francis Seymour Haden was one of the most important British etchers of the 19th century, along with his brother in law James Whistler. In addition to being a highly regarded artist he was a successful surgeon, accomplished author and dedicated angler. He was a founder and the first president of the Royal Society of Painter-Etchers and Engravers, and was knighted in 1894. Haden created a number of remarkable etchings featuring scenes of fishing in the British countryside, of which this is one of his finest.

Etching and drypoint on copper, image size: 5 1/2 x 8 5/16 inches, dated 1877, State V, cat. Scheniderman-172, pencil signed lower right. One of Haden's interests apart from being a Surgeon and printmaker was fishing. He created a number of outstanding scenes based on river fishing, his most famous being "The Complete Angler" and "Grayling Fishing." This is a wonderful example of building a composition centered on this well-known fishing hole. Provenance: Baldwin-Wallace College. 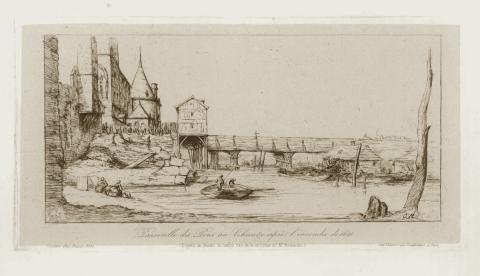 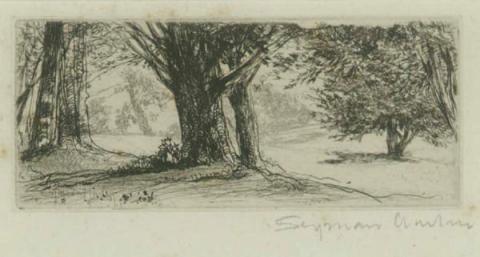 House of the Smith 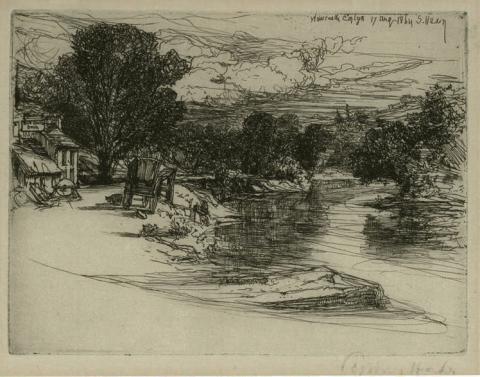 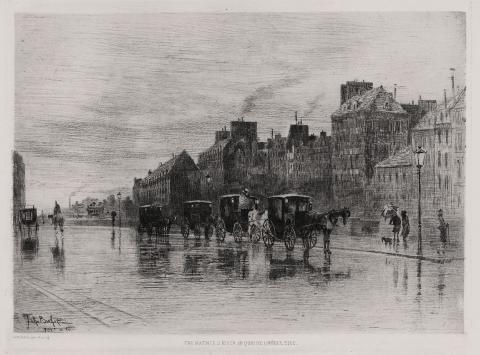 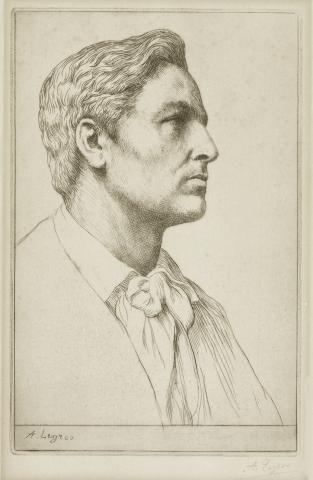 This is an original etching by French artist Alphonse Legros.  It is a portrait of British etcher Sir Charles Holroyd.  Created circa 1889.  This image has a plate size of 11X7 inches, printed on a medium weight laid type paper.  This etching is hand signed in pencil lower right corner of the border.

"Sir Charles Holroyd was one of the most prolific etchers of his generation. He was taught by Alphonse Legros at the Slade School of Art and his work shows the considerable influence of his close friend William Strang. Sir Charles Holroyd was appointed first Keeper of the Tate Gallery and later Director of the National Gallery. These posts ensured that he did not need to depend upon printmaking for his livelihood; consequently, his etchings were not issued in formal editions. Impressions of his etchings were only taken when required and, as a result, many of his printed works are very scarce indeed.

Alphonse Legros was the single most influential European printmaker upon the development of the etching revival in England. Born in Dijon, Legros was persuaded to move to London by Whistler, whom he had met in Paris. Legros rapidly achieved recognition for his highly accomplished etchings and in 1875 was placed in charge of the etching class at the Royal College in South Kensington and the following year was made Professor of Fine Art at the influential Slade School. It was during his eighteen years in this post that Legros was to exert a formidable influence upon the direction of an entire generation of British printmakers." (  thank you, Mr. Campbell)

Etching, image size 4 x 10/4 inches, 1870, plate signed u.r. "Lepic" and pencil signed l.l. "Lepic", from "Croquis Hollandais et Autres" plate 14. A view of fisherman along the banks of the Ombreux River with two watermills and a church in the background.