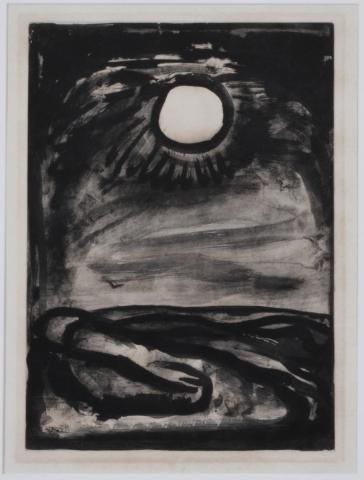 This is an original etching, and aquatint by French master Georges Rouault. The title of this work is "Chantez Matines,le jour renait"< (Sing Matins, a new day is born) This etching was created in 1922 as part of the Miserere series. This is plate number 29. It was published by Vollard in an edition of 450. It is signed lower left corner of the image. This etching was never pencil signed. It appears in the C& R catalog as number 82d., The image measures 20 X 14 5/8 inches. Nice condition, a line of toning in the border from an earlier window mat. 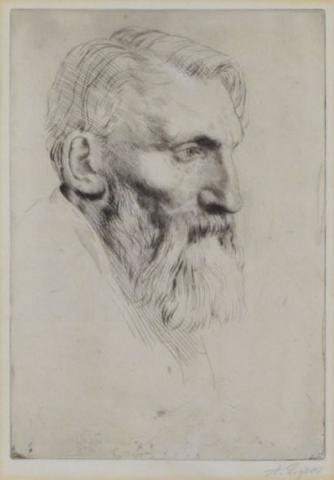 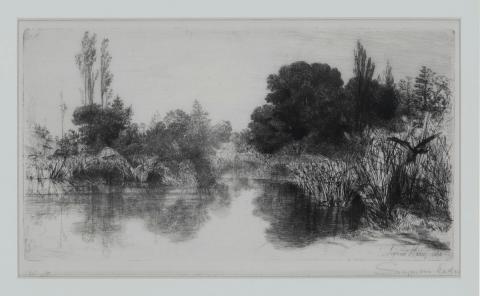 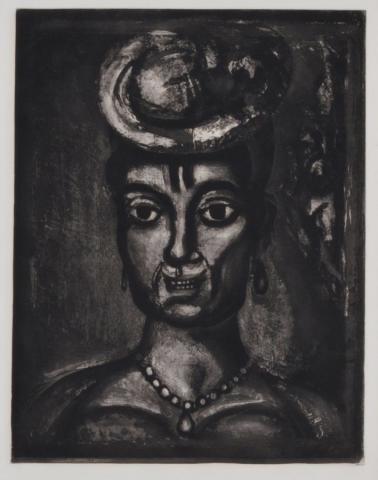 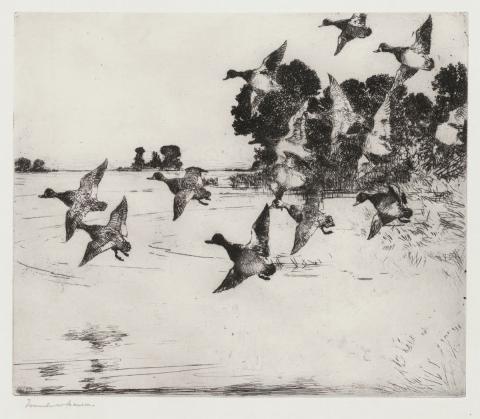 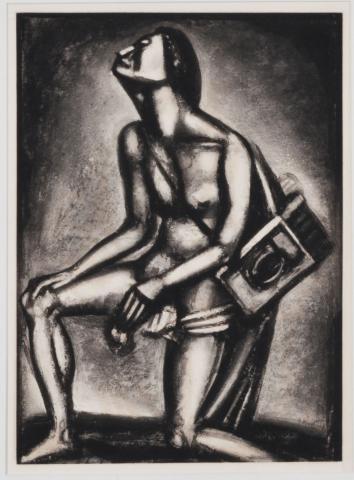 This is an original etching by French Master Georges Rouault. The title of this work is: "Sunt lacrymae rerum " ( There are tears in things ) This etching and aquatint was created for the Miserere series in 1926 as image number 27. . The platemark measures 24 1/4 17 1/2 inches. It was published in an edition of 450 on arches wove type paper by Ambroise Vollard. His Vollard watermark appears in the sheet. The etching is signed and dated in the image in the lower right. This etching was never hand signed by the artist. 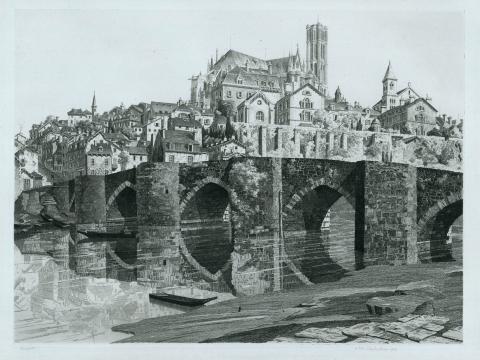 This is an extremely detailed etching by American master John Taylor Arms.  This image titled: "Limoges" was created and printed in 1932.  It was part of his series on French Churches.  The image measures 10 1/16X13 5/8 inches, printed on a blue toned laid type paper.  The etching is pencil signed and inscribed as "Ed 100 III" 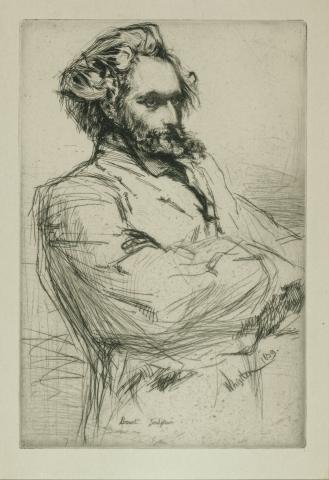 This is an original etching by American artist James MacNeill Whistler.  The title is Drouet, Sculptor, it was created in 1859, plate signed,dated and titled.  The image measures 8 7/8X6 inches.  This etching is according to the Glascow catalog is image 2 a.  This etching appears in the Kennedy catalog as image number 55.  A rich impression printed on a medium weight laid type paper.  The subject is: M. Drouet, the French sculptor.'  This etching came with the original label from print dealer Frederick Keppel. 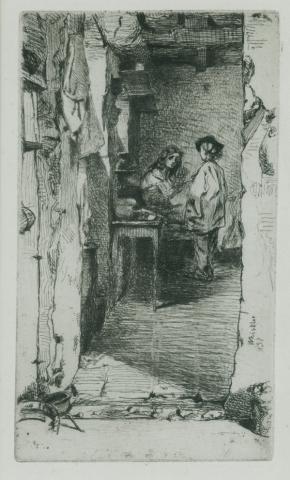 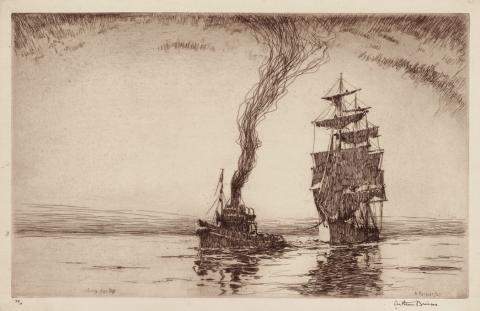 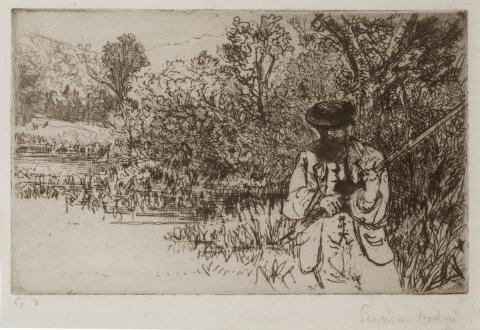 This is a rare etching by British artist Sir Francis Seymour Haden.  This etching and drypoint is titled: The Fisherman.  It was created and printed in 1864.  Hand signed in pencil which is quite rare for this image.  Printed in a warm toned ink, the image measures 5 1/2X8 7/16 inches.  This etching is the 5th state of 5 with extensive use of plate tone in the water and sky.  Haden was an avid fisherman, and apart from doing etchings and being a well respected surgeon, he spent his spare time fishing across Britain.  This etching is matted and framed. 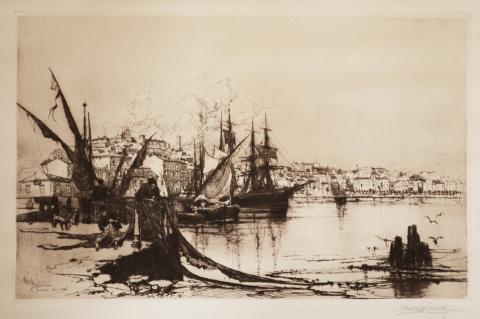 A superb portrait of Brockhurst's first wife Anais, this etching measures 8 3/4 x 6 1/4 inches, published in 1927 in an edition of 111, pencil signed. Born in England and found to be artistically talented at an early age, Gerald Brockhurst was enrolled in the Royal Academy Schools. A scholarship enabled him to study in France and Italy where the work of the great masters, especially Botticelli and da Vinci, had a lasting influenced on him. He became well known for his classically styled portraits etched with a remarkable sense of detail and texture. 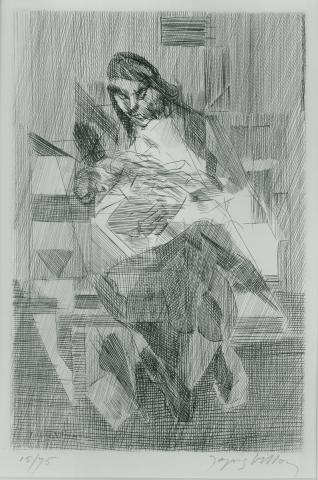 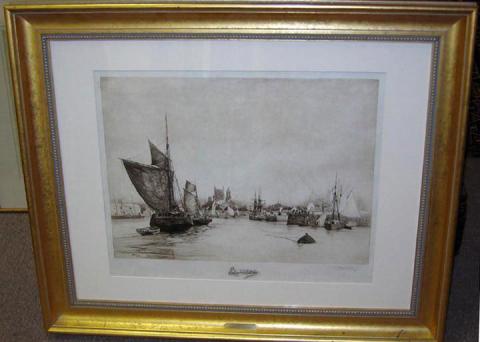