This is a drypoint etching from April 1931. Edition of 100. Catalog: BPL 105. Pencil signed in the lower right, pencil numbered 3 out of 100 in the lower left. Plate measures 11 x 12 inches on 14 x 15 inch Rives watermarked wove paper. Chamberlain captures this brightly lit scene with breathtaking detail. Samuel Chamberlain studied architecture at MIT, but interrupted his studies to serve in France during WWI. After the war, Chamberlain worked as an architectural draftsman in Boston before leaving the US to travel throughout France and Europe. During his time overseas, Chamberlain began sketching the countryside and architecture, eventually studying at the Royal College of Art in London. He became well known for his carefully rendered etchings and drypoints of both European and American buildings and cityscapes. 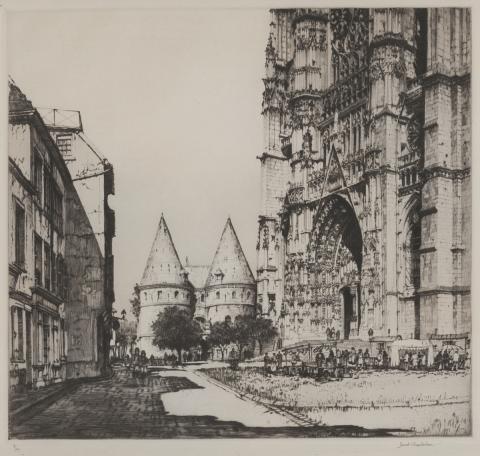