Etching from 1910. Catalog: Forster 30. Plate measures 12 1/4 x 8 3/4 inches on 15 x 11 inch laid type paper. Pencil signed in the lower right. This scene in London of the Immaculate Heart of Mary Church, otherwise known as the Brompton Oratory. The domed building in the background is the Royal College of Arts, where Anderson was studying at the time. Edition of 58. A finely detailed and well inked print with a rich drypoint burr. 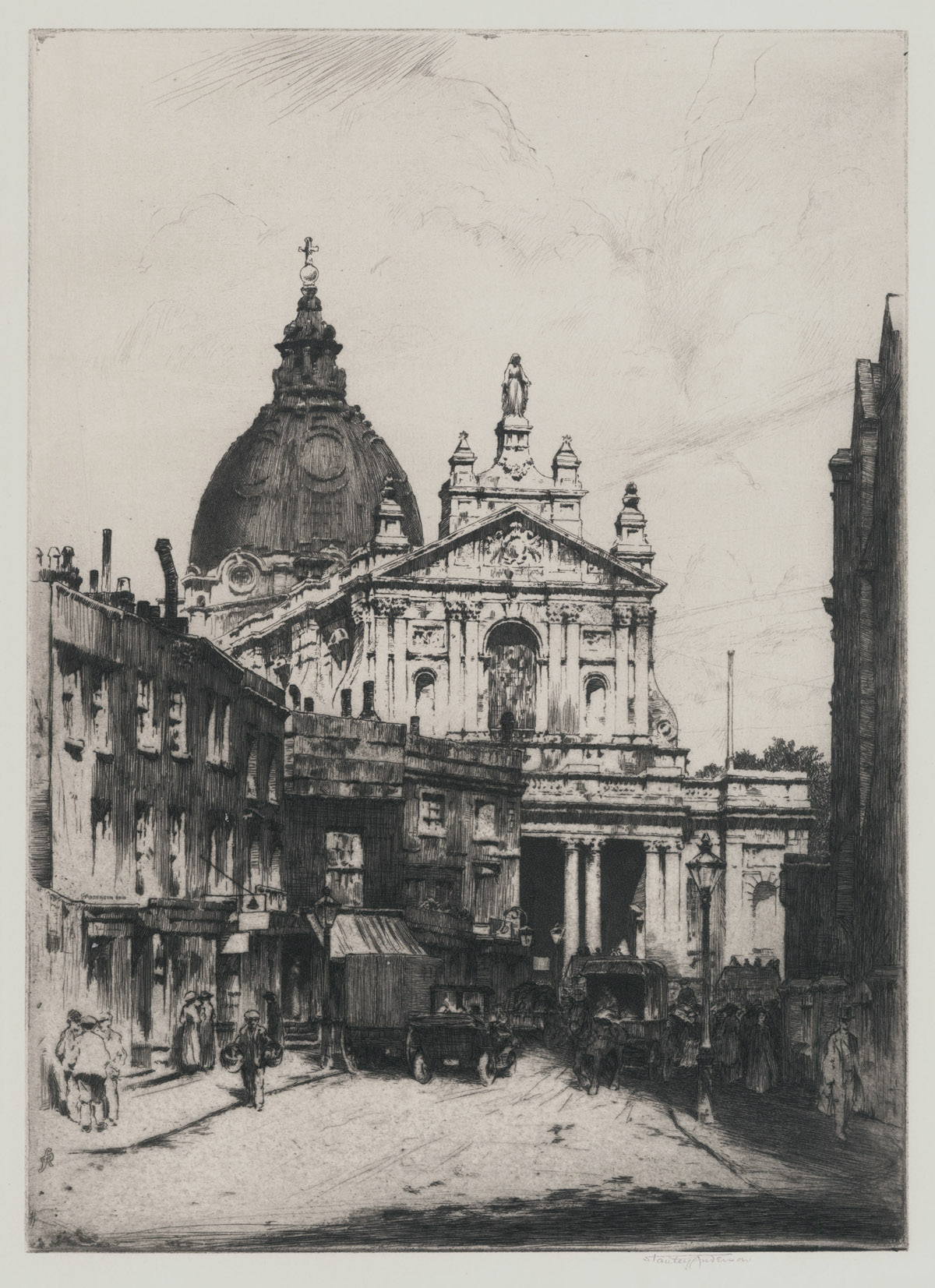 Plate signed in the lower left. Signed in ink in the lower right. Edition of 30. Titled and editioned in ink near bottom edge of paper. Print is adhered to matboard. Plate measures 6 1/2 x 8 1/8 inches on 10 1/2 x 13 3/4 inch paper. A sharp, finely detailed etching with rich drypoint burr of daily life on a busy street in Covent Garden Market against the backdrop of St Paul’s Church portico. 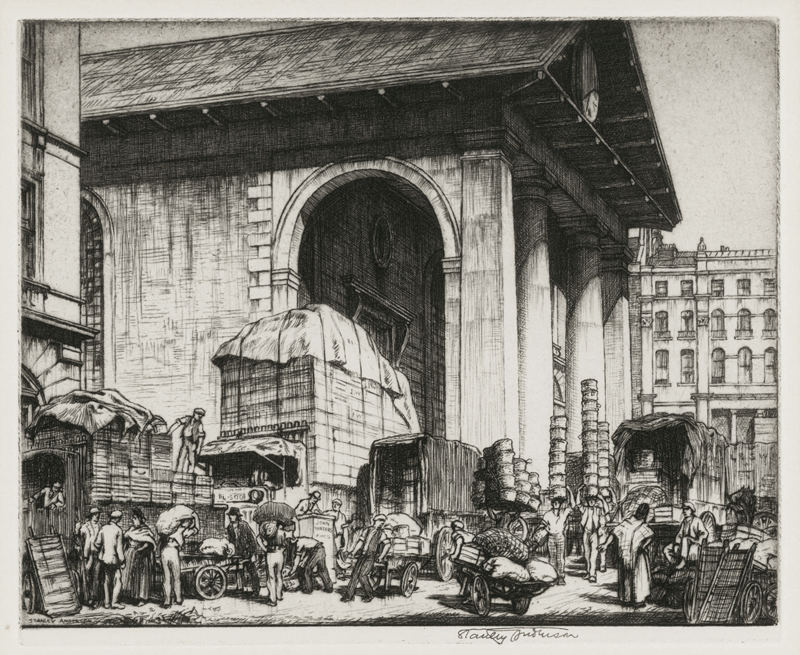 This is a rare early drypoint etching by British artist Stanley Anderson.  The title is: Perivale, a small town outside of London.  This etching was created and printed in 1911.  The image measures 5 3/4X9 5/8 inches.  Hand signed in pencil lower border and titled lower left border.  Printed on a medium weight watermarked with initials, laid type sheet.  Fine use of plate tone in the sky area. 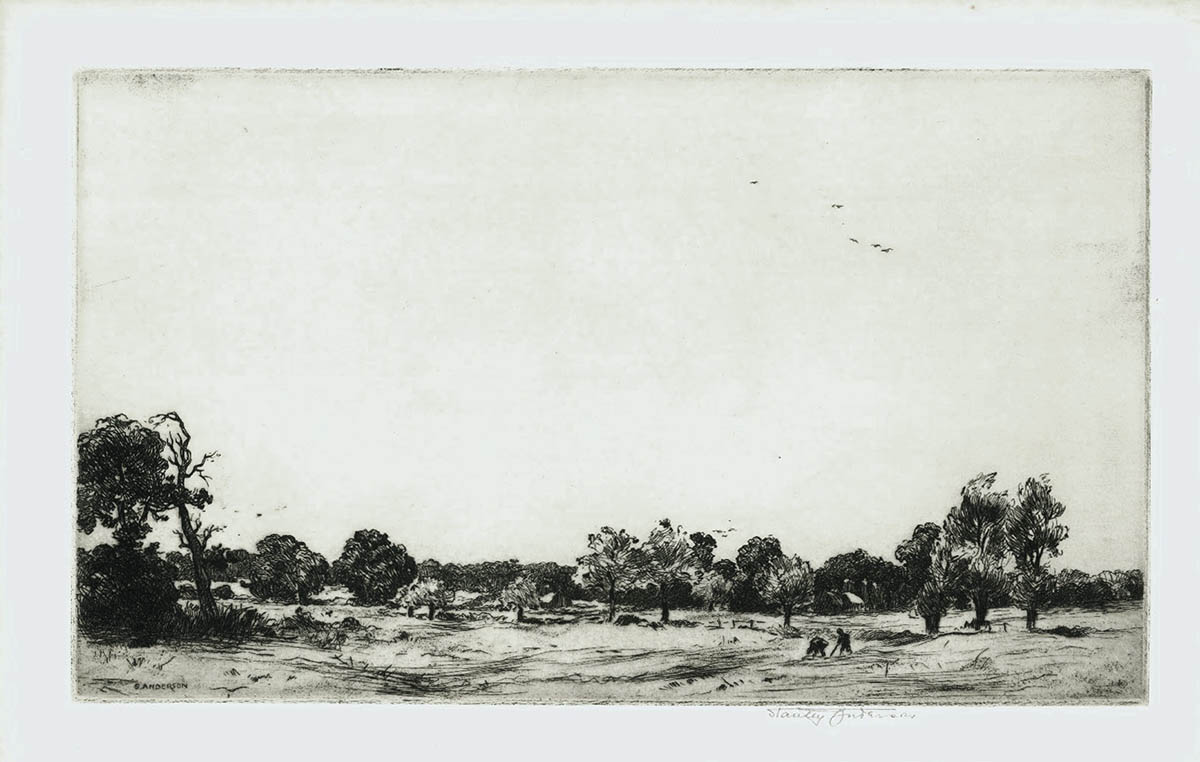 This is an original etching by British artist Stanley Anderson.  It is titled: The George Inn Public House, Southwark.  It was created and printed in 1919 in an edition of 175.  The image measures 9 3/4X12 inches, pencil signed lower right and has the blindstamp Fine Art Trade Guild.  It was published by Henry Graves.  "The George Inn of Borough High Street in Southwark is the only surviving galleried coaching inn in London.  It served as an outdoor theatre in Elizabethan times."  This image appears in the RAofA catalog as image number 96.  Good condition, but we a weakened platemark on the left side, most likely from the printing press pressure. 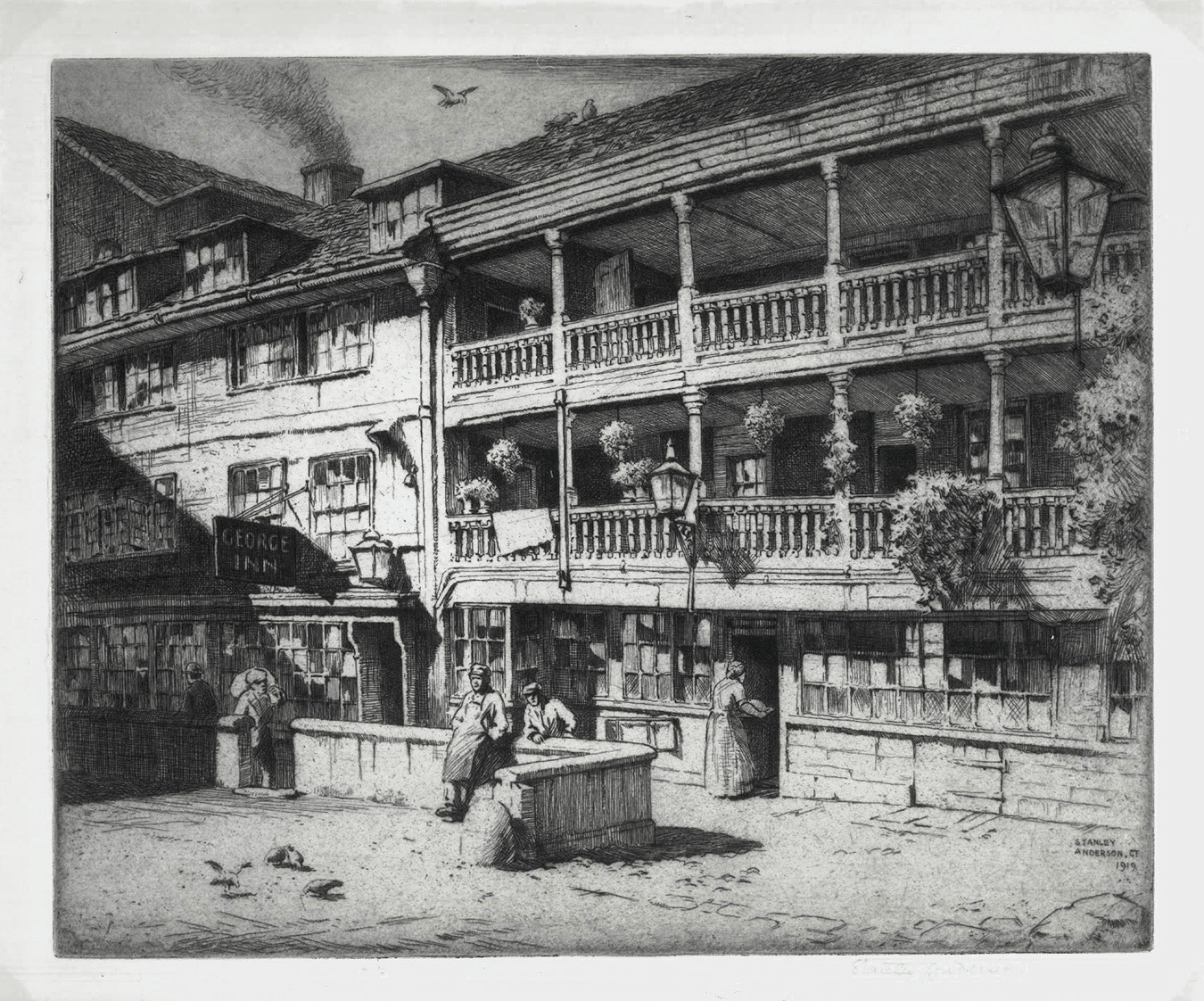 This is a fine Ex Libris book plate illustration by British artist Stanley Anderson.  This engraving  of fishing equipment was done for H.C. Drayton, pencil signed by Anderson and with  a stag circular blindstamp in the lower right corner of the border.  The image measures 4 1/4X3 1/4 inches. 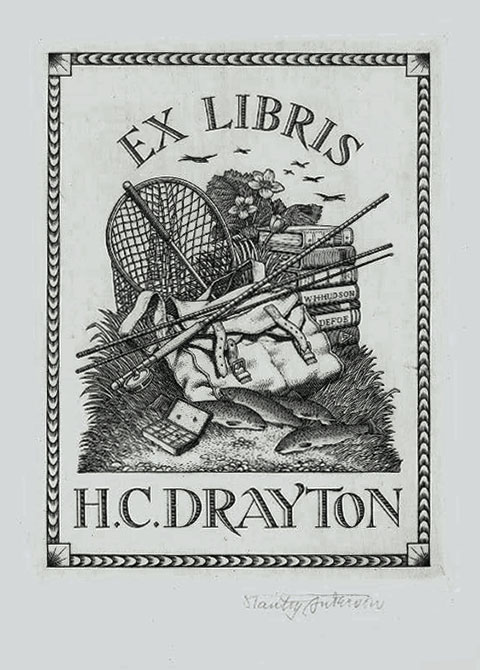 This is an original drypoint etching by British artist Stanley Anderson.  The title is: Quai Duperre, La Rochelle, This etching was created and printed in 1928 in an edition of 85.  The image measures 8 1/4X13 1/4 inches.  Printed on an old laid type paper.  Hand signed in pencil lower border.  This image appears in the R.A.A. catalog as image number 183. 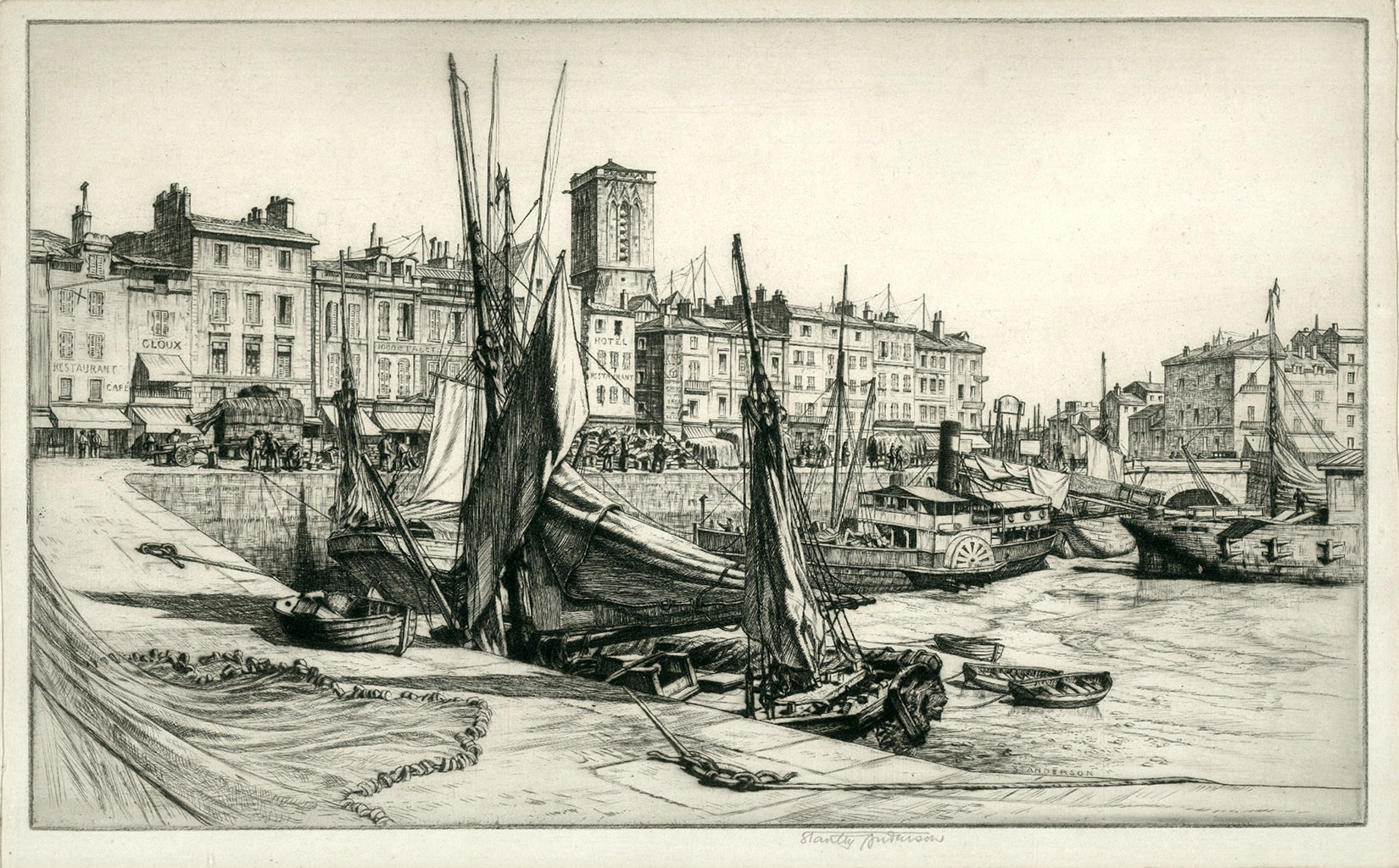 This is a fine line engraving by British artist Stanley Anderson.  The title is: The Reading Room.  This image was created and printed in 1931 and appeared in the 1931 edition of Fine Prints of the Year.  This pencil signed impression has an image size of 6 1/2X8 1/2 inches.  Printed on a medium weight laid type paper. 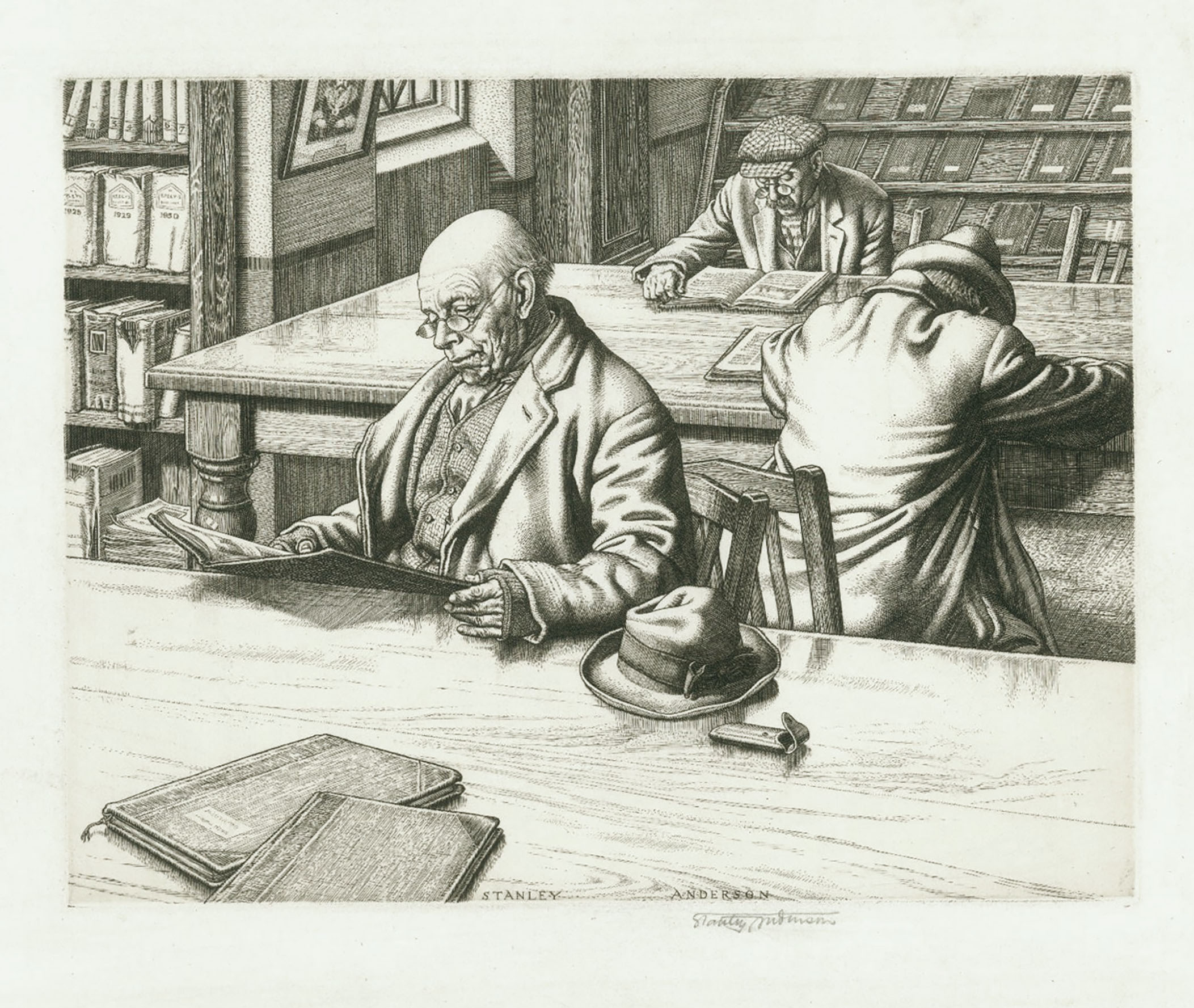