Featured
On
$425.00
Recent
On
Reserved
Off
Not specified

This is an original engraving by French artist Joseph Hecht (1891-1951) This study of a Deer was created and printed cira 1929. It is hand signed in pencil lower right and also editioned as number 11. This engraving was printed on a blue toned laid type antique paper with a shield watermark. The image measures 6X9 inches. Joseph Hecht, painter and printmaker, was born on December 14, 1891, in Lodz, Poland. He studied at the Academie Beaux-Arts in Krakow between 1909 and 1914. Hecht traveled throughout Europe until the beginning of WWI when he went to Norway where he would remain to render studies of the landscape in drypoint and engraving.

After the war ended, Hecht left Norway for Italy, then on to Paris where he was granted membership to the Salon d'Automne, and thus to the burgeoning Parisian artistic community. He met Stanley William Hayter in 1926 and helped him print his first drypoint. Hecht's meticulous attention to detail impressed Hayter and a lifelong friendship was formed. Hecht went on to publish his first portfolio of six prints in 1926, l’Arche de Noe, with a forward by Symbolist Gustave Kahn. He encouraged Hayter to open a cooperative printmaking studio, which became Atelier 17. Hecht worked with Atelier 17 through the 1930s. As conditions in Europe became more difficult Hecht, who was Jewish, left Paris and spent the war years on the Italian Swiss border, working as a laborer. (annex galleries) 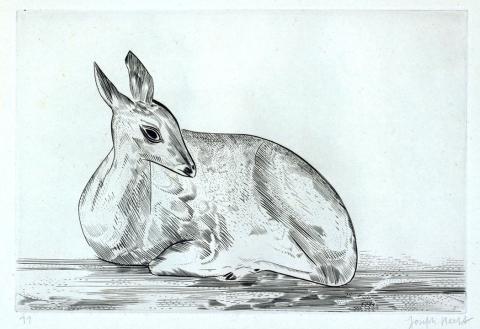